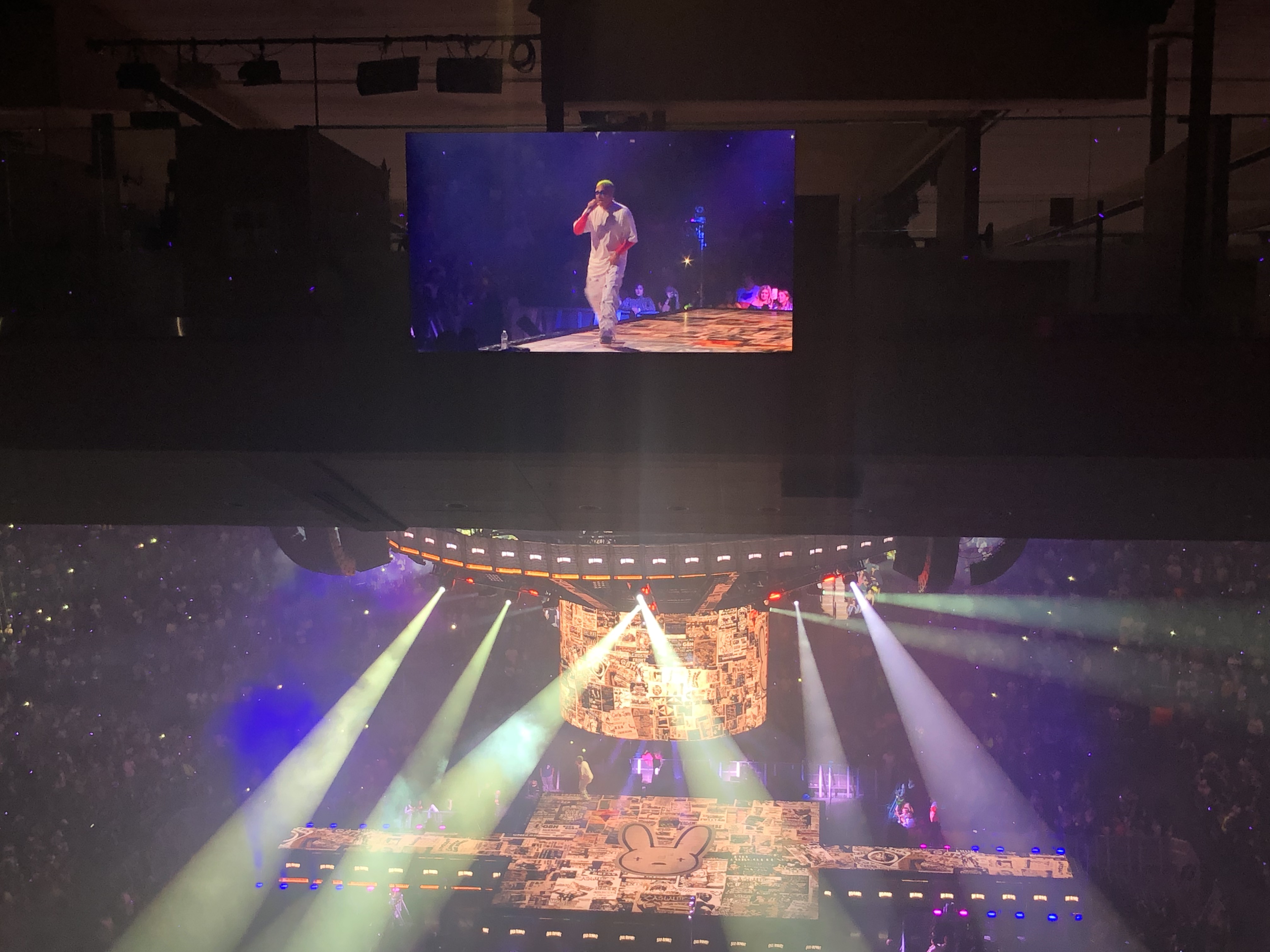 Latin Trap master Bad Bunny has this is common with James Brown, and out of sync with Latin Pop music from at least the 1950s, he doesn’t meet the US audience at the halfway point, to get Bad Bunny you have to go to him, but when you go to him, the rewards are a jump through the half hearted reggaeton of the past 25 years, and into a modern world music that takes off from hip hop while maintaining a Latin flavor without an inch of compromise.

At Madison Square Garden Saturday night, English wasn’t spoken,  the former San Juan bag boy, Benito Antonio Martinez Ocasio,  received the sort of  heroes welcome that only a local boy might received. And given that there is four times more Puerto Ricans in New York City than there is in San Juan, it makes complete sense. Bad Bunny wrestled control of the sound of Latin pop from Don Omar and Daddy Yankee’s abbreviated reggaeton vibe and returned it to the young. This isn’t Spanglish, it crosses over, even when Cardi B is morphing boogaloo, by remaining at its guts the sound of a Soanish language young American.

So Bad Bunny, performing single hits and songs off last year’s debut album , X 100 Pre, has had nothing much to prove. Except to me. In Match 2018 at United Palace (here), he was excited and enervated at the same time, singing and rapping to tracks, he couldn’t do what J Balvin did, restore order to wildness, singing through the taped recordings and 808s to provide the audience with a unique experience. At MSG he managed it, he learnt, and in a two hour performance, including a mini show with Archangel, Bad Bunny was an energizer Bunny, a relentless front and center presence whether singing his hooks off other people’s songs, or providing his own, he took a definition of Spanglish audience and put them in his back pocket.

In 2019, live isn’t what live was, everybody sings along to pretapes, including pre taped tracking vocals. I mean everybody. Bad Bunny as well. So the question is, what do you bring to the live portion. With an astounding theatre in the round, gorgeous lights, films screened over so completely they went from the stage floor to the rafters as they showed the island Bad Bunny came from, this was much more than a victory, it was a claiming of a nascent American Spanish world. Protecting itself from the post hurricane corruption of their leaders, and a racist President threatening them in ways he never threatened Texas, being Latin American has never meant more, or closer, to North American, it wasn’t about heritage only, but self  preservation. Bad Bunny exemplified  a sense of himself as a North American not lessened by language problems.

Bad Bunny’s first calling card is not his visor but his voice, born to rap it is 100% today, a baritone that bounces and slides through the drum machines with an easy going insouciance, all in Spanish, all talking to the audience in Spanish, he glided and danced, moved like a timbre of pop magnificence. Opening with album opener “Ni bien Ni Mal” to a beyond ecstatic audience, he didn’t slow down (even the ballads were taken at a fast clip) and he didn’t compromise through a 32 song set. “I Like It” was dismissed with a verse, and featured artist didn’t get better than Archangel. No J Balvin or Cardi B, or Ozuna, a contemporary and competitor, who just won eleven awards at the Billboard Latin Pop awards. They weren’t needed. Whether holding center stage, or with back up dancers, Bad Bunny mesmerized is audience with a set that was one slam hit after another. The only time the audience weren’t on their feet screaming, was the only time Bad Bunny left the audience to someone no one knew, so he could put on a harness and be hoisted round the 100s deck at MSG. 90 minutes in it was the definition of a mistep.

But it was the only misstep, whether tributing young people, calling out PR, or handing the reins to the audience, the evening did what his March 2018 show didn’t, it cemented his position as the biggest star in Latin pop.