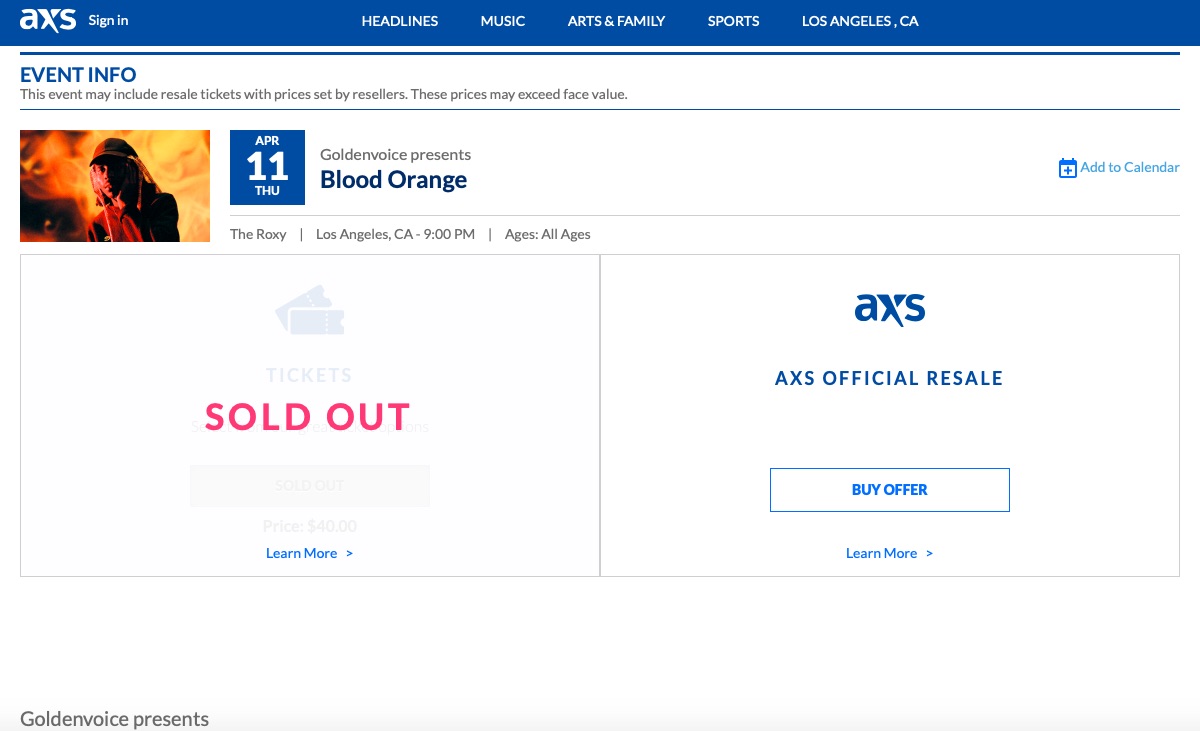 AXS selling page for Blood Orange’s show at the Roxy

Once again I am perplexed that such action can occur and be considered legal? Why is this even allowed?

Blood Orange is playing Coachella and, a few weeks ago, he announced he would be playing a local show at the Roxy between the two Coachella weekends. The tickets went on sale today, and I could not get one as the show sold out very fast,… This is the same old story that repeats itself each time. And right away, I saw this ‘AXS official resale’ button on the right side of the screen.

This is not the first time it happens, as soon as tickets have disappeared from customers’ carts, the official seller, the same one which was selling the tickets, is reselling them several times the original price. Just look at the jump for Blood Orange: the price was $40 plus fees when the tickets went on sale at noon today, and now AXS is reselling them at $145-150, so almost 4 times the initial price. And this is legal? This is not even StubHub or Vividseats or another reseller site, this is the same AXS page which is saying the show is sold out.

AXS, operated by Anschutz Entertainment Group (AEG), is the second largest presenter of live events in the world after Live Nation Entertainment (which is basically Ticketmaster), and to me, this is pure theft. AXS obviously still has tickets but since the demand was high, tickets have been withdrawn from the sale to make more profit? How could such a mafia be allowed in the ticket business? Why can they operate in plain view, ripping off people like this?

And if they are reselling tickets already bought by people who are putting them right back on the market, why are they encouraging scalping and why are they reselling them 4 times the original price?? Where is going the money? I can understand reselling a concert ticket when you realize you cannot make it a few days before the event but this is not the case as there were tickets on the resale site as soon as the show sold out, i.e. a few minutes after the concert went on sale.

I contacted AXS and asked them about this practice, but I don’t expect an answer. But if they do answer, this will probably be some fuzzy explanation to justify their shady business, as I don’t see any good justification for jumping the price of tickets from $40 to $145 in just a few minutes.

Update: I have just received this answer from AXS:

‘Thank you for contacting AXS. Those tickets are available because the person that originally purchased them has them listed thru our Market Place. We have no control over the price that the purchaser decides to sell them for. Sorry for the inconvenience.’

This confirms that they are participating in scalping because the tickets on the ‘official resale’ site went on sale immediately after the show sold out.