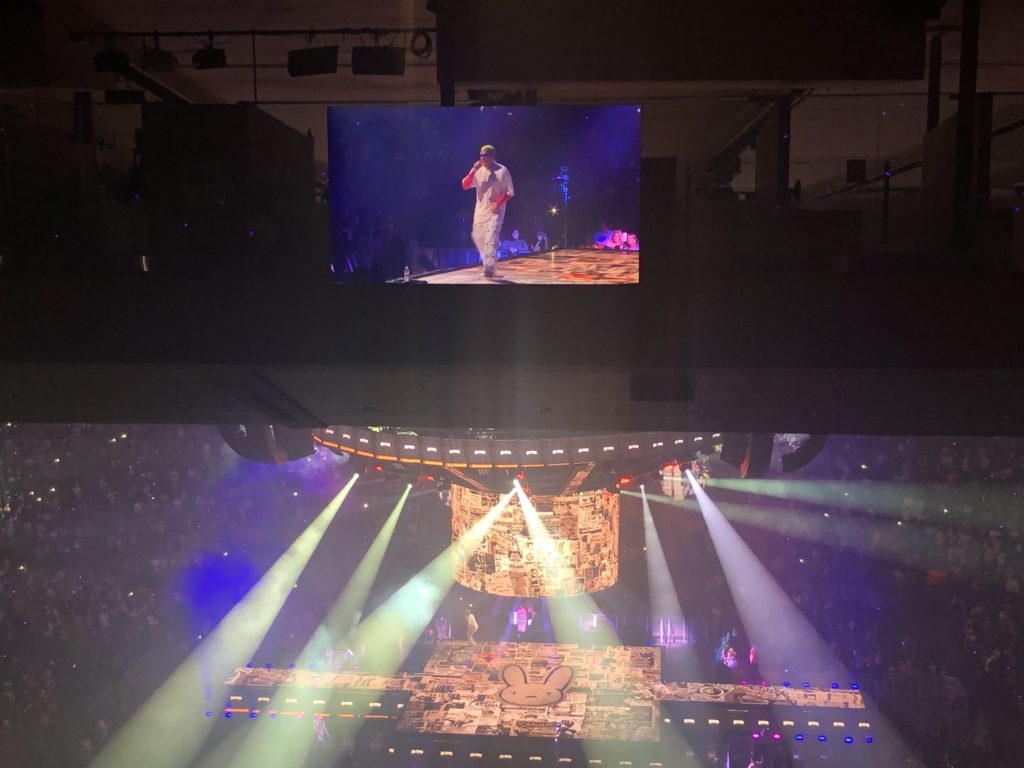 Ever since I first saw Bad Bunny (real name Benito Antonio Martínez Ocasio)  live, in 2017, he has been among my favorite pop stars. The Puerto Rican Latin Trap master has re-written the book of Latin pop over the past three years and is the biggest Global star in the world (The Guardian actually apologized for Britain not catching on here) as I write. He is certainly the biggest star at rock nyc. In April 2019  I saw him live for the third time (here) and wrote this:

“Bad Bunny’s first calling card is not his visor but his voice, born to rap it is 100% today, a baritone that bounces and slides through the drum machines with an easy going insouciance, all in Spanish, all talking to the audience in Spanish, he glided and danced, moved like a timbre of pop magnificence. Opening with album opener “Ni bien Ni Mal” to a beyond ecstatic audience, he didn’t slow down (even the ballads were taken at a fast clip) and he didn’t compromise through a 32 song set. “I Like It” was dismissed with a verse, and featured artist didn’t get better than Archangel. No J Balvin or Cardi B, or Ozuna, a contemporary and competitor, who just won eleven awards at the Billboard Latin Pop awards. They weren’t needed. Whether holding center stage, or with back up dancers, Bad Bunny mesmerized is audience with a set that was one slam hit after another.”

M y last line of that review was “it cemented his position as the biggest star in Latin pop.” (seriously, it was a sold out MSG), after releasing a handful of streaming concerts and three great albums in 2020, he was no longer refined to Latin pop, whether changing styles, without singing in English, he went straight ti the top of the class. I knew YHLQMDLG, the first drop of the year in February was gonna be huge and it was, the all bangers superstar summitt opening with a Carlos Jobim sample (a biggie: “The Girl From Ipanema”) it is relentless in its ear candy. The features are minimal (though the list of producers, 29, sure isn’t), and so you get Bad Bunny’s slurpy, voice on reggaeton-trap hybrids that also incorporates rock, pop, and electronica. Highlighted by “Safeera” -an update of 00s reggaeton, “Si Veo a Tu Mamá,” and “Pero Ya No” – it is a thrilling encapsulation of dance reggaeton for Puerto Rico and the world… and the Coronavirus hadn’t even hit yet.

The second release was LAS QUE NO IBAN A SALIR, filled with features during the Spring of Covid, May 2020, with outtakes from YHLQMDLG, Bad Bunny does what he will and while it misses on the great rock outs, and is the least of the three albums, it is still unbelievable (Grade: A-). However, even as a huge fan I found EL ÚLTIMO TOUR DEL MUNDO difficult, recorded in quarantine he released it in November 2020, and it was the first Spanish language album to get to # 1 in the Billboard 200. The single, the delirious “Dakita” lead the way and it was a sucker punch, the most thrilling song of his year (well, either “Safaera” or “Dakita”), settled into a brooding rock, pop alt sound unlike anything out there. when I went to MSG I was the only English speaker there, that won’t be true in 2021 -he will sell out everywhere with a huge crossover audience.

Bad Bunny is a real star, he reminds me a little of Harry Styles with his sexual ambiguity and shades, his crossover charm and 21st century open mindedness. Puerto Rican is as conservative as a Roman Catholic country can get, and still Bad Bunny has pushed the unincorporated territory of the United States into other places. Really, why can’t Puerto Ricans vote? Bad Bunny is so cool he makes Puerto Rico, not the hotbed of corruption and mismanagement sucked dry by the USA but a center of culture, art. A world within a world where Grocery star bagger Benito listened to reggaeton mix tapes and then began to drop his own. Bad Bunny, like Harry, is not solely a master pop song crafter, he is also a style great and, unlike Harry, an icon and a symbol of his country.

And he deserves it, during the worst year since 1942 Bad Bunny , streamed over 8 billion times on Spotify in 2020, cemented his position as our greatest pop star.