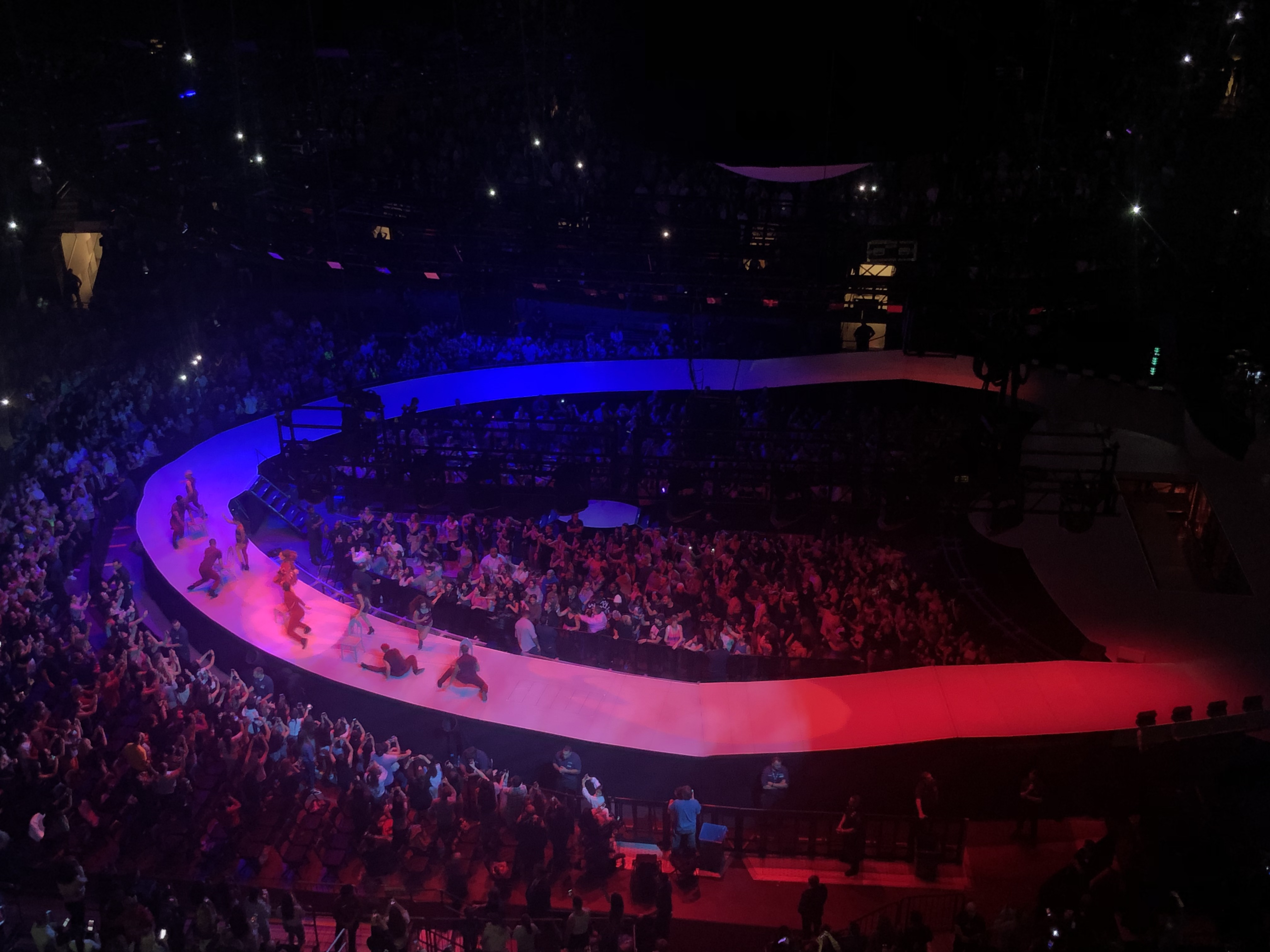 Two years later, Ariana and I are both back. In the distance between Manchester and New York, Ariana had transformed the world’s opinion of her as a donut licking, tween girl dissing, big voiced, bad song, pocket diva to what she is today: the world transforming, terrorist beating, songwriting champion GOAT with a series of singles from “Thank U, Next” to “Monopoly” that justified her position as the biggest star of 2019… plus a sold out world tour reaching Madison Square Garden last night. Ari lives here, but you wouldn’t have known that at all..

There is no real reason for her last two albums, Sweetener and Thank U, Next, to be substantially better than her first three: all five are world of Max Martin, Pharrell Williams, pop stroke, song by stitch and paste, but they are better, much, much so. Perhaps it is simply that Ariana is the best defined popstar of her generation, a branded ponytailed woman who overcame the death of her ex-boyfriend, a huge public break up, and a world where her life and her career are inseparable, lives what she sings and sings what she lives: despite the song by committee, they are all of a piece, they don’t belong to anyone but her. In the theatre of the real, Ariana at 25 years of age is an emblem for the ages.

Predictably, though for no other reason than the songs are so much better, the 2019 is Ari is superior than the 2017 Ari that had me writing “she is a distracted star, the artistry is in the singing only, and her singing is great while everything else is off. She dances with her pony tail and is expansive on the stage, but it doesn’t amount to much more than a run through the bland and very big last album Dangerous Woman.” Having said that, and with every reason to present a stupendous live show, she remained a little indifferent. Nothing pushed, nothing pulled, a bit like Justin Bieber when I saw her open for him, there seemed to be a line in the sand between her and us and she didn’t come close to crossing it the way, say, Taylor Swift, or Madonna on the “Rebel Heart” tour, managed to with impunity. The openers opener, before both opener Normani and Ari, Social House, are three songs into their pop duo swag career, and don’t do more than dash around the stage, and they were more clearly communicating with the audience  than either a predictably shruggable former Fifth Dimension Normani, who looked great, and danced well, but was a waste for half an hour of calisthenics, and Grande herself who was much more the “I hate America” of 2014 than the woman who returned to Manchester to perform for the victims and survivors of 2017.

It was a courageous move, returning to Manchester (she is humongous in the UK ever since)  and very much like the Gemini she is. On Twitter and in song, Ari let’s her fans in, and on stage she shuts them out. Very bizarre, a set that should have been a huge signpost for the adult and also free Ari wasn’t much different in attitude, was, in fact, a little colder, than the Ari of February 2017. The material was great, two of the songs are among the best of the year, and Thank You, Next, has been in my personal top three albums  since the day it was released. Unlike her pop r&b settled into a four-octave soprano and first three albums, the last two have a complete side track and different way of doing business, and it is great to hear them live, but she doesn’t really sell them. The singing is fine, the music mostly taped and PC generated, though I did notice a guitar solo, but Ari isn’t all in at all, she is the biggest pop star in the world, but she doesn’t give sway to it.

The teen tween girls in the audience, all ponytails are thigh high boots, adored her, but what would they have done if she had given them more to work with?