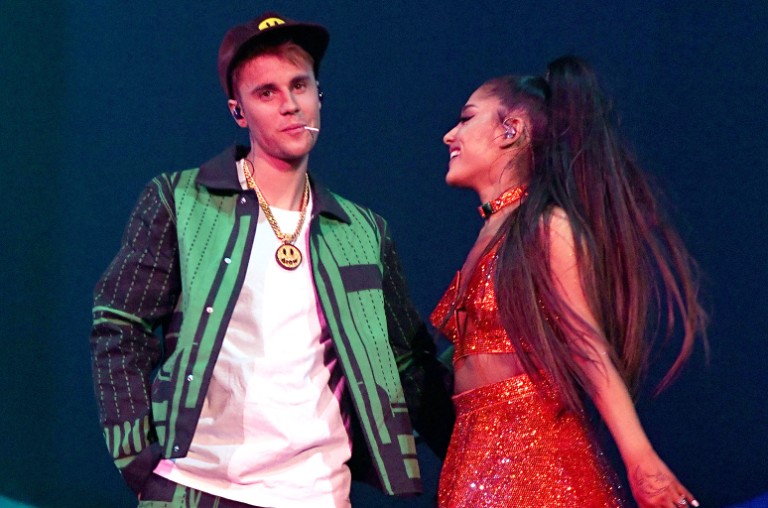 Just a coupla days ago, we were, er, warned? about this top pop summit at the top of Mount Olympus of gooey superstardom, Ariana Grande and Justin Bieber together on record for the third time (but first that isn’t a remix), and the song’s net proceeds  will benefit children of first responders with grants and scholarships.

It is also a busy little thing, with a Prom that isn’t gonna happen video of fans and the two twentysomething idols with their love ones, a shadowy new boyfriend for Ariana,

Justin and Hailey doing their usual nauseous puppy dog domesticity (as Christgau nearly said about “Our House”) and a MOR pop ballad with some of the shamelessness of a “Can’t Stop The Feeling”. Of everything we’ve gotten musically explicitly based upon the pandemic, this comes closest to being a utilitarian effort: “the prom song for everyone who can’t go to prom now” is how Bieber put it, and that’s exactly how it plays though it has none of the innocence of teenagerdom, and rather a manipulative scheme at the underscore, now manipulative doesn’t necessary mean mean because it ain’t there, it is just vapidly self-aware of its effect.

So, a triumph for guiding light the villainous Scooter Braun and a prom song for those without proms. I love it right now, the sweet waltzy flow is unruffled, the singing top notch, and  having said that: if it doesn’t become a hit and/or if repetition grows it into an ongoing annoyance we may have to revisit