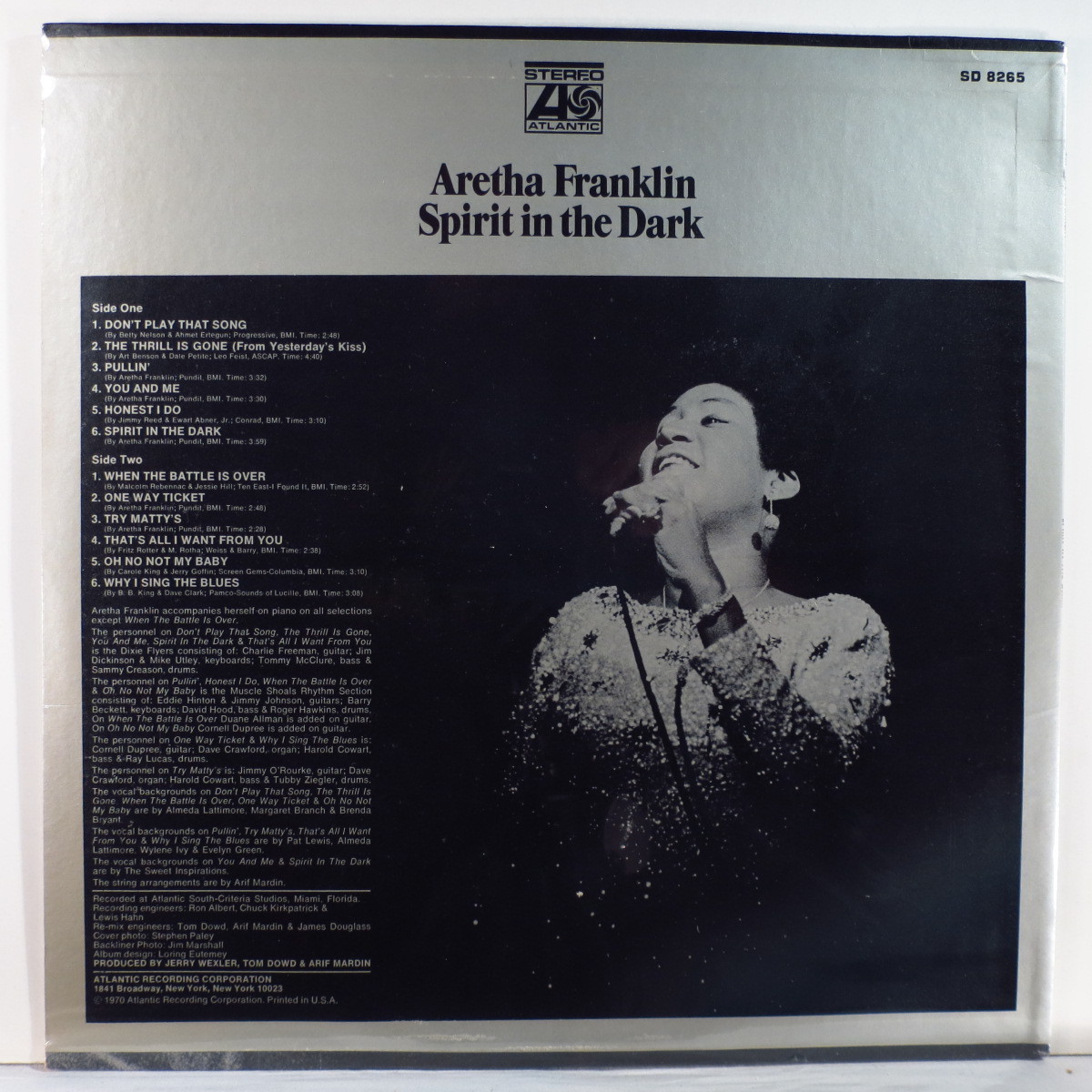 If This Girl’s In Love With You, was Aretha Franklin’s most ordinary album that wasn’t very good (here),  eight months later came album # 19, Spirit In The Dark,  her most ordinary album that was excellent. Released in August 1970, produced by Tom Dowd, Arif Mardin and Jerry Wexler, and with two great  rhythm fetishist bands backing her, the Dixie Flyers and the Muscle Shoals Rhythm Section. The Dixie Flyers were lead by session drummer Sammy Creason and had the smooth confidence the Muscle Shoals Rhythm Section always have had. It is the Dixie Flyers on both hit singles, “Don’t Play That Song” and title track, “Spirit In The Dark”, it is the Dixie Flyers on “The Thrill Is Gone (From Yesterday’s Kiss)”, and three other songs. The rest is Muscle Shoals. But anchored right in the middle, with Aretha in astounding voice throughout, and on piano on ten of the twelve songs, she is right where pop music needed her to be. In such control of her craft that she can present the songs without  grandiloquence, without arrogance, without anything less than supreme confidence.

When you set out to review the collected recordings of an artist of Franklin’s caliber, the hope is to fill in gaps and to be quite honest I never realized I had so many gaps in my knowledge, how, over the years, Aretha had become the hits to me – I was watching her live every time she came to town through the last 25 years of her career (including her final New York performance at Radio City at a tribute for Clive Davis), she kept to Gospel and hits and that was mostly it. I never heard her perform “The Thrill Is Gone” on stage. But you hope you have made that mistake, you hope to find Spirit In The Dark, an album as clearly soulful as anything she had ever made and yet as tuneful and of the moment as possible. While a restrained Aretha sounds like an oxymoron, and her “Oh No Not My Baby” maintains control by a thread, it is a relatively easy going sound: the statements are musical and they are within a pop music/soul conduit, there is no “Let It Be” or “Eleanor Rigby,” she isn’t updating her sound, this is simply it, it is her sound.

Or less simply, four tracks stand out: “The Thrill Is Gone (From Yesterday’s Kisses)” and “Why I Sing The Blues” are blues, “Don’t Play That Song” and “Oh No Not My Baby” are pop, and “Spirit In The Dark” somewhere in the middle. That’s nearly 50% of the album is unquestionable greatness. Listening to “Don’t Play That Song,” the interplay between Aretha and backing singers, first cousin Brenda Bryant and  Margaret Branch (who also sang with The Sounds Of Soul, The Sweethearts of Soul, and The Edwin Hawkins Singers), who also appear on four other songs, (Aretha uses the Sweet Sensations on two songs she wrote for the album) and the give and take, the threading of the vocal needle is breathtaking, it stops you cold; though the pieces are not of a part  anywhere really, she coalesces in ways  Aretha didn’t  during her Columbia years, enough to make them adhere to her vision of soul as a woman’s prerogative. Check out the piano bridge on Aretha’s own “You And Me” -this isn’t her thumping Gospel piano, it is a quiet and soulful bridge, it reflects the songs sentiments with an easy going glow. Her boogie woogieing  on “Try Matty” is a sheer pleasure.

This Girls In Love With You seemed to be shaking us by the shoulders and claiming, “hey, I’m hip as well” whereas Spirit In The Darkness is so clearly in the moment , it is the sort of effort where the proto-liberation Louisianan swamp Dr. John co-composed “When This Battle Is Over,” with another Louisiana native Jessie Hills blues, is followed immediately  with straightforward r&b meets jazz meets pop “One Way Ticket”, and they both improve with proximity.

Maybe Franklin’s divorce helped her see even more clearly, maybe she realized that she needed absolutely nothing added to what she does, just smart collaborators, smart songs, and a self-confidence that is overwhelming because it isn’t arrogance, it is skill on every single level of her gift. One of her greatest albums.