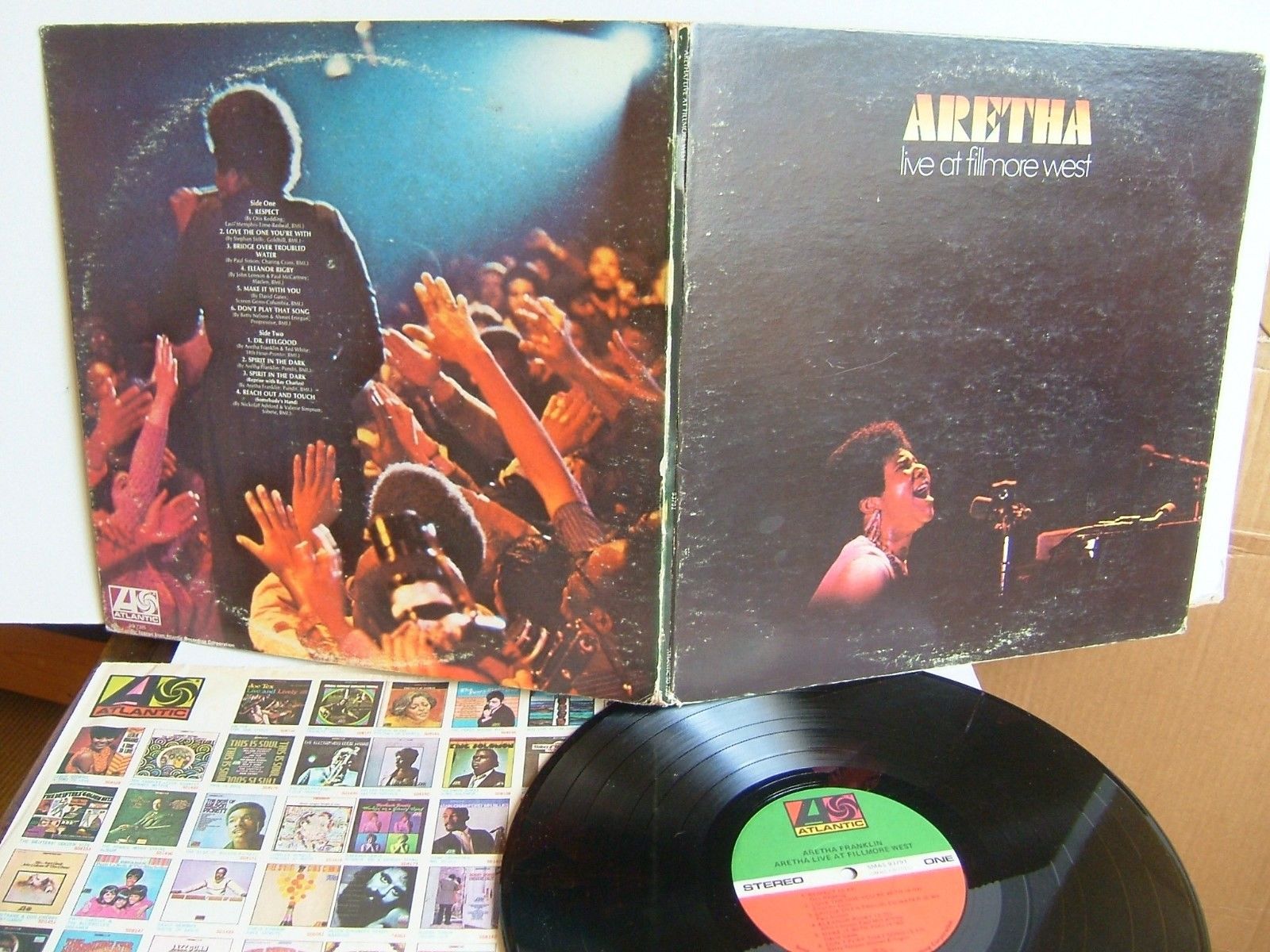 As we reach album # 22, ut is 1971 and with  Aretha’s third live album Aretha Live at Fillmore West, it is clear that music is a business and Aretha is nothing if not a business woman. The business now is making the biggest soul singer the biggest pop sing, and for that Franklin went to California to the hippie temple Fillmore West where she performed a mix of Aretha hits and pop slices. The first side has three pop tunes bracketed by “Respect” and “Don’t Play That Song,” side two is an Aretha build up to a “Spirit In The Dark”  followed by a an eight minute plus reprise featuring Ray Charles. Twenty years later, the entire two nights of performances as well as opening act  saxophonist cum band  conductor King Curtis eleven song each night, two night performance, was published as a box set.

Curtis would die five months after the Fillmore West show from February 1971  at the age of 37, stabbed to death for no good reason at all outside his apartment. You think you don’t know Curtis maybe, it was a long time ago, but not really. If you wanna hear him go to “Respect” and also “Yakety-Yak”. The man was big time, and his backing band is very strong throughout this album, so why isn’t Fillmore West a masterpiece? “Respect” is overblown and two fast,  the Ray Charles featured should stand as a mountain in her career but it is overwrought indeed, the three pop songs are meh, we don’t need to hear Aretha covering Bread, or Simon And Garfunkel (or The Beatles either  certainly not “Eleanor Rigby”) and while the album is a powerful explosion, and both the end of side one’s “Don’t Play That Song” and opening of side two “Dr. Feelgood” is what we were hoping for, and while the vibe is a somewhat underfelt let’s see if this sticks, undoubtedly it didn’t feel like that if you were there. Finally, having Aretha end the set with a Diana Ross cover is insulting.

Still, as Curtis’s last hurrah and as a taster of  what Aretha is capable of, it ain’t bad. How bad can “Spirit In The Dark (Reprise)” be precisely? The complaint is simple: it isn’t the best thing you’ve ever heard. And the album got to # 1 on the r&b charts so it sure did well, it was the least crass of money moves imaginable, a watering down of the product with songs white teens will know as the added plus. Aretha doesn’t go easy on the vocal histrionics and she makes things hers that she doesn’t much want to be hers. And some she does, the coda to “Dr. Feelgood” is a blazing ululation of beauty as well as a little overblown, and overall at least half of the album is great and even the worst of it (guesses? “Make It With You”) is good enough.