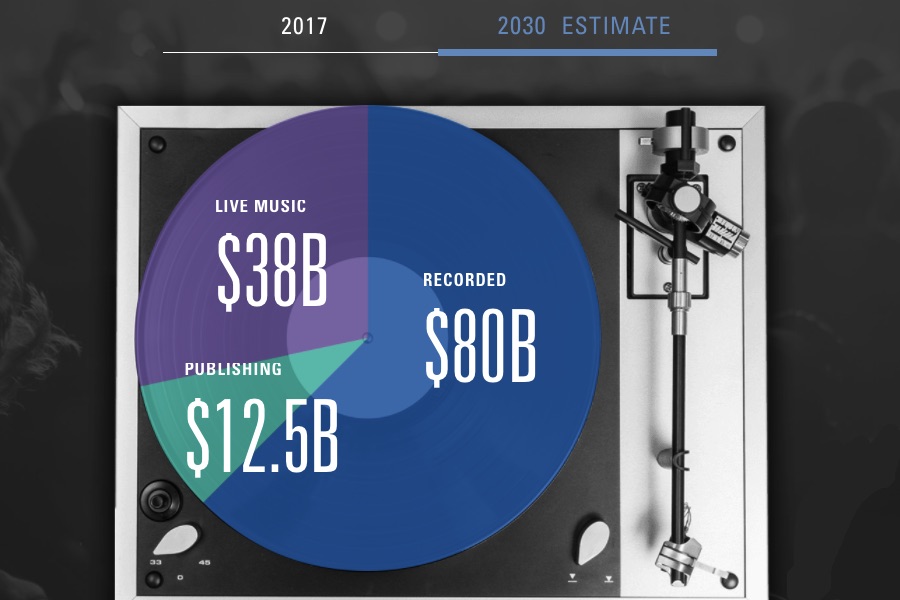 You probably think the state of the music business is right now in deep disarray and big trouble. With no upcoming concert, tour, or festival, with not even a small venue open anywhere in the world, the music industry is losing tons of money. Analysts at Goldman Sachs revealed in a research note that ‘live music would be ‘severely impacted’ by the postponement and cancellation of events this year, leading to a 75% drop in revenue.’ And if there is no surprise in this declaration, a new report, written by top analysts, forecasts that music revenue will double by 2030, to reach the impressive amount of $131 billion. They estimate the growth from 2017 to 2030 in these terms:

How could they be so optimistic in these uncertain times?

There are two things: ‘Millennials and Generation Z are spending more of their annual budgets on music than other age groups’ — the 18-34-year-old group is indeed the group who spends the most — and the proportion of people who stream music on their smartphones is growing every year. Streaming platforms are here to stay and are expected to grow from a comfortable 18% part of the market in 2018 to a more dominant 37% part of the market in 2030. There is also some hope for singer-songwriters as the analysts also project a small growth (from 3 to 7%) in new payment solutions, new business models and the recognition of intellectual property rights.

In short, these experts think streaming platforms will propel global music revenue to record highs with a continuous decrease of physical album sales as well as downloads (which could be close to 0 by 2030) in parallel with a sharp and steady increase of streaming.

If music streaming was down at the end of March, nobody can deny the overall growth of Spotify over these past years. The health of music industry may not be stellar at the present, with probably a 75% drop in revenue due to the Coronavirus crisis, but, according to this new report, there will be a strong rebound mostly due to the streaming market, which could capture 1.2 billion users by 2030 (almost four times higher than the 341 million paid subscribers in 2019).

Analysts at Goldman Sachs also added that time spent listening to music ‘may shift away from music streaming to other forms of entertainment in the short term,’ but they believe the industry’s long-term growth outlook is intact.’

Of course, the main beneficiaries of this growth will be the major record labels, Sony Music, Universal Music Group, Warner Music group,… and streaming platforms like Spotify without forgetting YouTube. One last thing, since Goldman Sachs disclosed it has received compensation for investment banking services from Alphabet, Spotify, Tencent Music Entertainment Group and Vivendi (owner of Universal Music Group) over the last 12 months, we can understand their interest in the music business.