An Update On The Curious Case Of Britney Spears 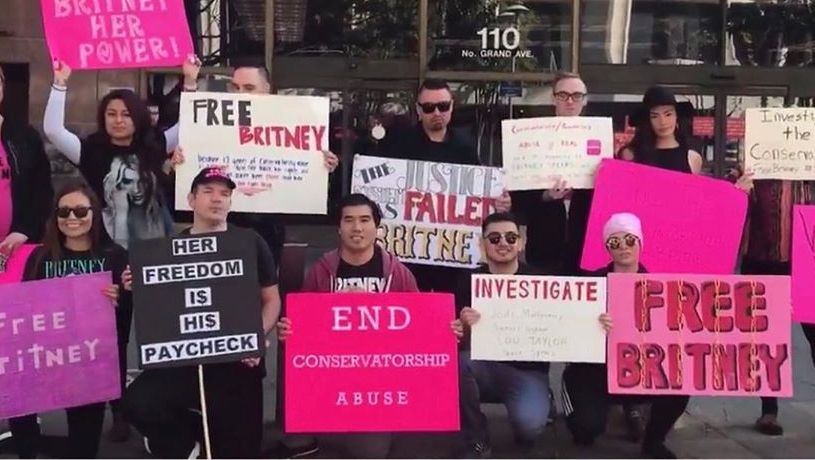 Fans outside the courthouse: the Curious Case Of Britney Spears

Poor Britney Spears, it seems that things are not going too well for the famous pop star who was supposed to appear in court in front of a judge at the end of last week. She was supposed to discuss her 12-year-long conservatorship case alongside her parents Jamie and Lynne Spears. I have already explained the details of the curious case of Britney Spears, and for many fans behind the #FreeBritney movement, there was a lot of hope that this court hearing will clear up the situation.

According to the court documents once again obtained by the Blast, Britney didn’t show up, even though it was a virtual court hearing. Her father Jamie Spears requested the documents to be locked from public view which is a big defeat for the #FreeBritney movement, still going strong on social media.

The movement pretends that the conservatorship prevents Britney from basic freedom to the point where she is not allowed to drive a car alone, see her children, or do any ordinary thing of today’s life, while her father has total control over her finances.

The hearing was supposed to examine Britney’s finances, mental health, personal life, and psychological state, to see if she could get free and put an end to the conservatorship, but it seems she has missed a big opportunity. Now that the court granted ‘the motion to seal the transcript, conditionally seal the Status Report filed pending a further motion, and the motion to clear and close the courtroom,’ there is little chance for the #FreeBritney movement to go anywhere, despite the fact that the Change.org petition has now more than 230,000 signatures and counting.

A few days ago, her brother Bryan Spears was interviewed during the As NOT Seen on TV Podcast and when he was asked about the conservatorship, he could not have been vaguer, saying that, yes, Britney has always wanted to get out of that, but adding that he didn’t understand what the #FreeBritney movement really wanted. He continued saying that if she wants to end the conservatorship, he didn’t know ‘what level of that is the reality.’ His answers were nebulous and almost uncomfortable as he looked almost condescending when talking about his sister, questioning her ability to handle things because ‘she has been surrounded by people since she was 15.’

Drew Plotkin, the podcast host, noted that it’s not unusual for a celebrity to have several assistants and that we were talking about something else in this case, but Bryan continued to portray his sister as a person who was unable to handle simple tasks, ‘she is the worst driver in the world!’ he said. And if I don’t use this word very often, he appeared like a complete misogynist during the rest of the interview.

Meanwhile, Britney Spears has continued to post ridiculously superficial videos on social media, and when she is not dancing (she is in great shape by the way) she is answering to ‘questions from fans’ about her favorite Disney movie (it’s ‘Frozen’) or other groundbreaking revelations. Bryan assured she has complete control of her Instagram account, but looking at these short clips, she surely doesn’t appear to have the maturity you would expect from a 38-year-old woman.

The #FreeBritney movement is nevertheless convinced she is sending cryptic messages through these videos. For example, some of them are coming up with crazy numbers based on god-knows-what-in-the-video and find the corresponding line from the Frozen movie to get: ‘just tell them to let me go.’ Others have seen 911 written in her eyelashes or ‘help’ inside a white hat she was wearing. I looked very carefully and this was even less clear than these Jesus’ faces on potato chips… which led me to think that either these people have a lot of time on their hands or are insane or both.

But you have to admit that the fact she loves ‘Frozen’ because ‘one sister left to live in a castle because she couldn’t deal with it anymore’ is a bit suspicious or at least revelatory. There are wild conspiracies and puzzling speculations all over socials, and if you fall for them, be aware it’s a bottomless rabbit hole.

I don’t think Britney is sending cryptic messages through her social media, but I don’t think her brother was sincere either, and I am not exactly sure of what is happening with Britney. If she really wanted to end the conservatorship as Bryan said, why wasn’t she at the virtual hearing? The last information I could find is saying she had technical difficulties? In a multi-million mansion? She could have done the Zoom meeting on her phone! But wait, she doesn’t have access to her phone!

Some celebrities (Cher, Paris Hilton, Vera Wang,…) have expressed their concern over Britney Spears’ situation during these past months, which demonstrate there is probably more to the story:

Question…Why is a woman being worked,If Its Known By Her Conservator that She’s not well enough to Care for herself

Meanwhile, Britney’s personal affairs are now controlled by manager Jodi Montgomery, who will remain her guardian until the conservatorship is up for extension in August.