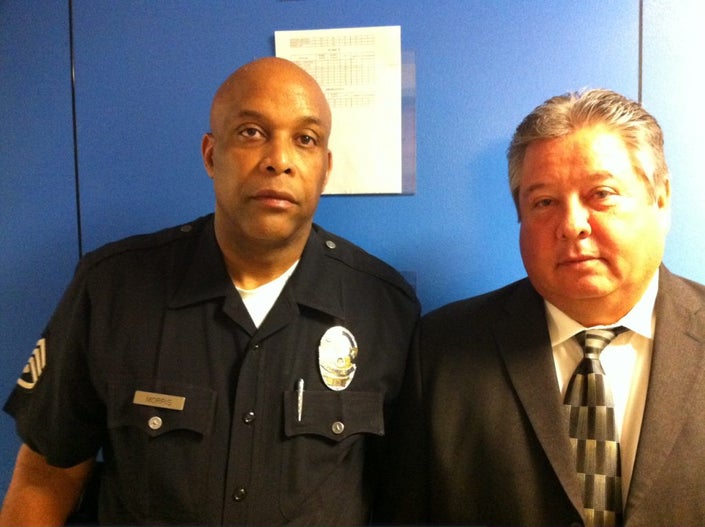 I talked to LAPD homicide detective PJ Morris when I was just starting to research Elliott Smith’s case. We talked on the phone around 10 years ago, when he was still working as an LAPD Detective III Coordinator for homicide in the northeast division.

I remember him saying he could not say anything about the case because it was an open case, but when he realized I was someone willing to share information and not someone who was just looking for some juicy scoop, his tone changed a bit and he became interested in what I had to say, without revealing too much what he thought about the case.

Nevertheless, I remember (and this is because I took notes) that he said at one point in the conversation ‘But you know we are not considering this case as a suicide!’ … and I thought, ‘but what else a homicide detective could do?’ Still, it was a good indication of his view of the case.

He also mentioned additional reports beside the files I had acquired from the coroner, and he confirmed that the suicide note and the knife were in the police’s possession. However, I cannot say I learned much from detective PJ Morris at the time.

He retired 10 years ago, probably not very long after our conversation and I have tried to communicate with him in the hope he would now feel a bit freer to talk about Elliott Smith’s case?

It took me very long to get in touch and to receive an answer, but PJ Morris, now retired LAPD homicide detective living in the suburbs of Los Angeles, talked to me via messenger. The problem is that, after 16 years (Elliott died in 2003), memory can be failing, especially when you were working as a LA detective and probably investigating numerous cases. ‘I vaguely remember that case. I’ve been retired over 10 years now,’ wrote PJ Morris. After giving him a brief summary of the case, he added: ‘The only thing I remember is that the case needed additional investigations and evidence to move the case forward.’

However, he also added ‘I only remember that it was a very suspicious incident.’ And this was probably the best thing I could get from him! This is obviously in complete opposition with the declaration you can read at the end of Gil Reyes’ ‘Searching for Elliott Smith’ stating that ‘An LAPD detective reviewing the case says off-camera he believes it was a suicide.’ Reyes could not even give me the name of the detective when I asked him in person whom he had talked to. I can say I talked to PJ Morris, who was investigating the case at the time, Reyes simply dodged by saying it was confidential information.

After talking a bit longer with Morris and mentioning my conversation with Chiba’s neighbor, he encouraged me to contact J. King again, as well as another detective I had never heard about. I thanked him and he added: ‘You’re welcome. If I were still active and working I would have loved to have you involved in all of my cases.’… which was a really great compliment.