Amoeba Needs Our Help To Survive The Coronavirus Crisis 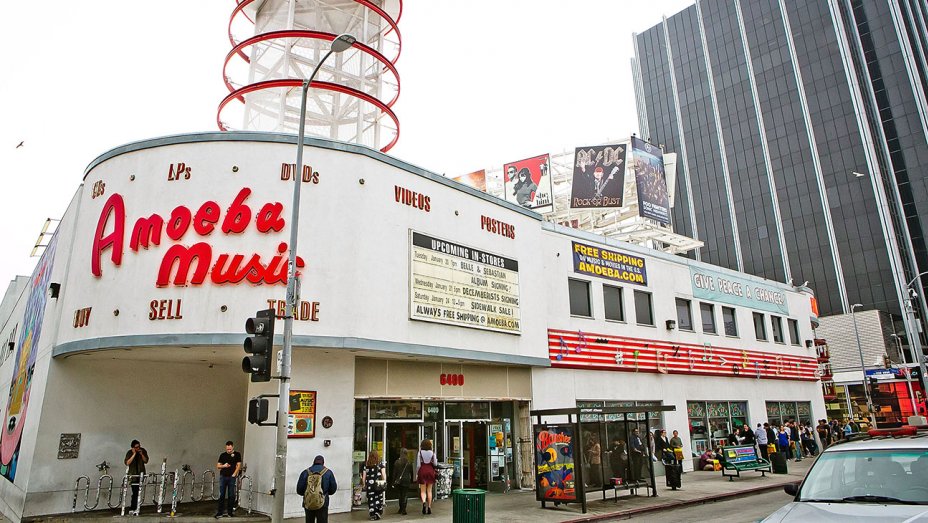 Amoeba, one of Los Angeles’ landmarks, is, like many other businesses,  in financial difficulties . But unlike any other stores, I have a long love story with Amoeba and I would be very sad to see it disappear as another casualty of the coronavirus crisis! Sadly, the giant record store has been closed for a few weeks like any other so-called non-essential business in LA, and manager Marc Weinstein has started a Go-Fund-Me fundraiser: ‘Amoeba needs help to survive’.

Amoeba, the world’s largest independent record store, has 3 locations, in Berkeley, San Francisco, and Los Angeles, and at a time when all of them disappear one by one all over the country – how many of these are exactly left? – we must preserve these endangered species, these national treasures. Where else can you go when you want to find any CD, any album, any vinyl, any DVD? What else is left? Amazon, which, is sadly the only other possibility.

I have a special relationship with Amoeba Hollywood, I also go there very often simply because they have free concerts all the time. Any time an artist is releasing an album, there is a mini-concert at Amoeba, often followed by a signing. I have seen countless concerts over there, I was even among the lucky people who lined up the entire day to go see Paul McCartney play an instore more than 10 years ago. It was a very special day, people had camped on the sidewalk for days, two women next to me had flown from England to be there. But Amoeba has hosted plenty of other similar events over the years.

Amoeba Hollywood opened in 2001, I was an instant fan and I can’t even count how many artists I have seen there in 19 years! Plenty of stars, the last one being Ozzy Osbourne while the most memorable ones could have been….The Flaming Lips, PJ Harvey, Rilo Kiley, Elvis Costello, Aimee Mann, Pat Benatar, Daniel Johnston,  The Raconteurs, Gary Clark Jr, Prophets of Rage, Lana Del Rey, Patti Smith, Ryan Adams,  Michelle Phillips, Anderson .Paak, Duran Duran, Peaches, Le Butcherettes, The Police’s Andy Summers, Alabama Shakes, Billy Idol, Annie Lennox, Karen O, Gary Numan, David Lynch, Ric Ocasek, Nick Cave, Cat Power, Linda Ramone, Peter Hook, Stevie Nicks, Jenny Lewis,… What a lineup! And it goes on and on, this is just a selection, I have seen hundreds of concerts at that place, and every time the performer was telling how much he or she was happy to know that such a place existed every time, the musician/band was able to sell physical copies because of the signing organized by the store, a very important point at a time when streaming is the dominant way music is consumed these days. Amoebe certainly covered some of the most interesting releases of these past two decades.

With a staff of 400 people (300 at the LA store), currently furloughed because they are closed during the quarantine, Amoeba is asking for help in the middle of the coronavirus crisis. One of the problems is that they don’t know when they are able to reopen, so their financial situation could surely become even more problematic. Amoeba Hollywood is also planning to change its location this fall from their Cahuenga location to a spot across from the Pantages theater and I remember there was some fear among the public at the time that the store would disappear entirely.

So now that the store is in real danger, it’s time to help. Everyone can help for sure, but I am also sending a request to people like Paul McCartney who had so much fun at playing an instore in 2007 and whose daughter Stella even rented out the place for a fashion show years later. Or to people like Quentin Tarantino whom I met over inside the store, while he was doing his shopping for what was probably the soundtrack of ‘Once Upon a Time in Hollywood’? Amoeba has raised over $100,000 so far, but they truly need a big sponsor during this coronavirus crisis, because the store is the last bastion of the record culture, a Los Angeles landmark as authentic as Disneyland, and probably even more authentic if you are an adult.