Amanda Palmer’s “There Will Be No Intermission” At Beacon Theatre, Saturday, April 20th, 2019, Reviewed 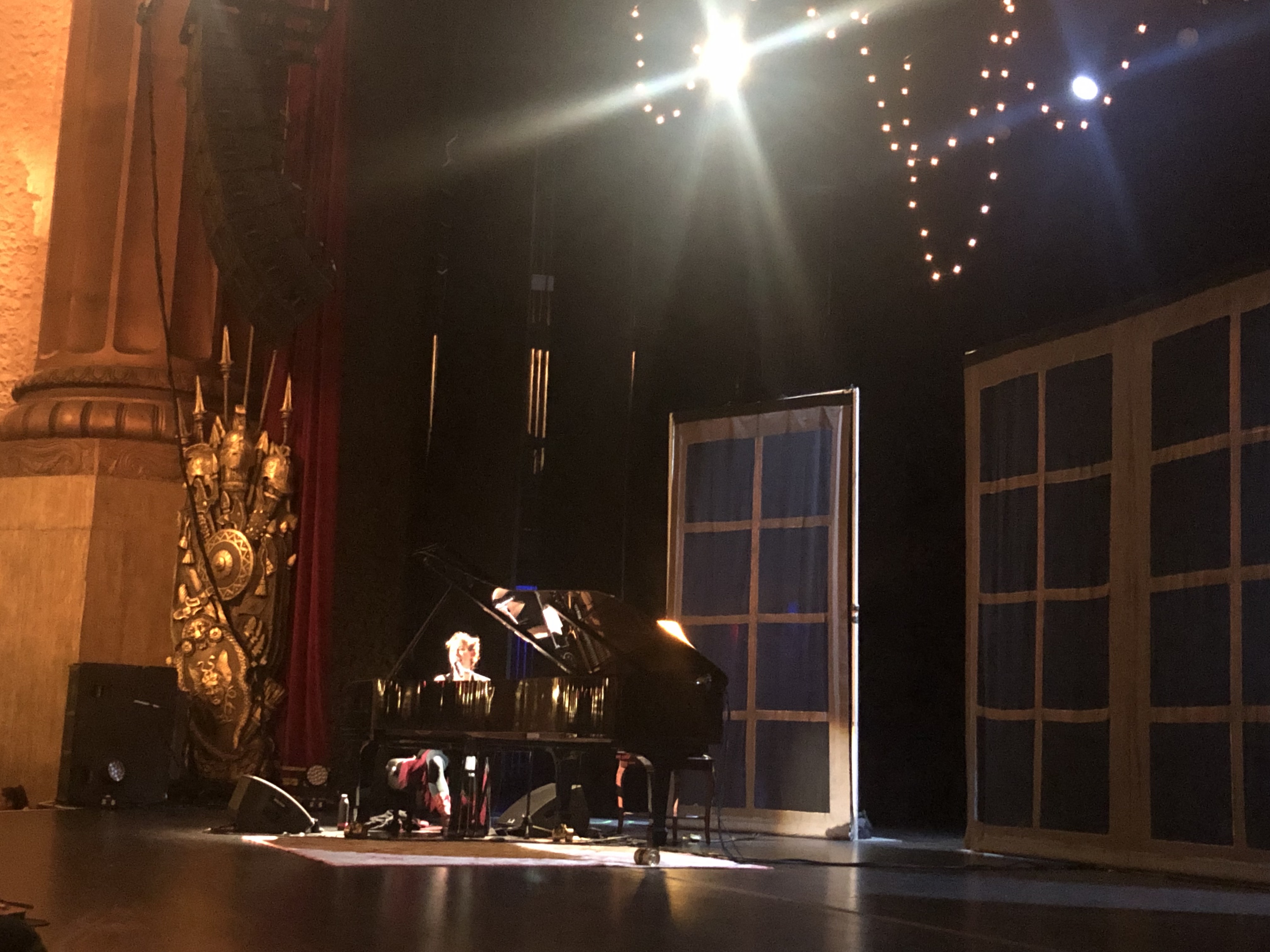 In 2012 about Amanda Palmer at Webster Hall  I wrote, “As brutal as you’d expect, but her good nature disrupts the spastic enclave of sound: it is like Amanda is giving you a good whipping and putting balm on your wounds between strokes” (here). In 2019, it is like Amanda is putting you into a crying jag and offering to wipe your tears, hand you a handkerchief, and crack a joke to get you over it. Not literally but kinda, “If it gets too sad, shout ‘Amanda it’s too sad” and I’ll play the opening chords to ‘Coin Operated Boy’ and broke off the show three times to do just that.

Amanda Palmer, the rock star cum performance artist, released her third solo album, There Will Be No Intermission, earlier this year: a too long, sometimes boring, sometimes less than great, but when it hits right, it hits so right, that the album is one of the best of the year. Well beyond simple words last confessional, at first hear I thought it was a reflection of the world in 2019 but after watching her well past confessional too long, sometimes boring, sometimes less than great, spoken word memoir with songs show last night, it is more hip hop confessional: she can’t stop looking at herself  and wondering where that vision hides. Self-deprecation and ego doing imaginative cartwheels of the mind.

So I sent the 2012 review to her publicist with a request for an interview and got turned down. Running a music blog you get used to being turn down (the last time I was turned down that much I was in my late teens) and if her management had bothered to check up they’d have found stuff like “Helen Bach Wants To Kiss Amanda Palmer On The Mouth” (here) so maybe, but of course,  they only did the usual math: time of interview times cost per AP hour divided by readers in thousands and  that was that. I was pretty mad but I hope  not the reason I’ve given  Palmer one negative review after another till this year. I hope it is because her 70 minute set at Damrosch Park Bandshell (here) wasn’t good enough.

Or perhaps, as Amanda Palmer returns to time after time to defer negativity, I’m not part of her tribe. Saturday evening at Beacon was a study in not being part of the tribe, there are people who can sit through two plus hours to get through eight songs including story. That would be 15 minutes a song, I found her tough going. To her very real credit, Palmer is both both boring and mesmerizing, in the second half of the program  she tells a  story leading into “The Killing Type”. The punchline? “Amanda ,The Squirrel Killer”.  Even as you fidget and check your Iwatch, Palmer makes your patience pay dividends.

The story begins with Amanda as a pre-teen synthpop fan listening to Duran Duran, before her bass playing big brother (who would die young of Lou Gehrig disease), turning her on to Goth rock like the Cure. As a teen, Amanda would play the piano with so much gusto, she’d break the strings of the piano, an expensive habit ($100 a string) her Mom would pay without a murmur. Mum also put Amanda’s first abortion at the age of seventeen, on her Visa. From there, Amanda takes you through a slew of deaths when she was eighteen years old, Dresden Dolls (sadly, she doesn’t discuss her time as a Boston based dominatrix), two more abortions, the death of her closest friend Anthony, and the birth of her son. In between their are a handful of controversies and you end the first part of the evening wishing there wasn’t a second part. The second part is faster but less cohesive.

The truth is: I have no place of entrance when it comes to abortion, and not much interest. The other truth is, yes every life is sacred but not every life is sacred to every person (more maths: proximity times amount of people dead) and the least of the world’s worries in any serious sense is the lack of birth of the unborn. However, since Amanda won’t shut up about it: the third abortion was a little iffy. Amanda makes the case that there are no good songs about abortion. I can think of two, the Sex Pistols “Bodies” and Amanda’s “Oasis” oh and Graham Parker’s “You Can’t Be Too Strong”. Actually, there are tons of good songs about abortion, though “Voicemail For Jill” isn’t one of them.

There Will Be No Intermission the album is my second favorite album of 2019 (actually third, Billie just took the top spot), I love it, and listen to it with gritted teeth. It is the titanic of rock albums, a behemoth that sinks beneath its emotional weight and yet is still a huge thing, a big, feeling, crushing, artistic statement. It reminds me a little of Marla Mase’s Miracles: Lost And Found -sparer then Marla but the same unveiling of things so bleak, as Amanda calls it at one point, “making light of darkness”. Amanda’s spoken word is astounding, you give  into her so much you forget that this all conned, written and mesmerized, it sounds personal, one on one, free associated memory, until you get to the end of the story where there is always a payoff for listening to this very sad stuff. BUT EVEN IF THERE WASN’T, who cares how you get to “Bigger On The Inside” as long as you get there. This is from that song:

The French kid who sent an email
To the website late last night
His father raped him and he’s scared
He asked me
“How do you keep fighting?”
And the truth is I don’t know
I think it’s funny that he asked me
Cause I don’t feel like a fighter lately
I am too unhappy
You are bigger on the inside
But your father cannot see
You need to tell someone
Be strong
And somewhere some dumb rock star truly loves you

She wrote the song in response to, of all things, her poem for the nineteen year old Boston Marathon Bomber “A POEM FOR DZHOKHAR” that got her in  a world of trouble in her native town. Here is an excerpt:

Really? This upset people in Boston? Do the words Christianfuckinganity. Really, we are an unforgiving world. Empathy and compassion mean nothing if we are being empathetic and compassionate about all the good that is happening to people, the same way free speech must be unpopular speech, so must empathy and compassion begin with those that the world condemns.

Amanda moved from grand piano to ukulele, nearly invisible behind her piano but sitting cross legged at the lip of the stage, somewhat vulnerable, when playing the ukulele, she perform her indie folk pop songs with absolute assuredness and they sounded lovely. I have no idea  she how she remembered it all. Saturday night, Amanda gave a great performance, not good, great. Yes, it wasn’t my world, and it wasn’t my dream, not at all, but she was magnificent: so gentle, kind, hurt, sad, clear sighted. On “The Little Mermaid” cover “Part Of Your World” she imagines life from the viewpoint of a zygote, both hysterically funny and deeply moving, it was the apotheosis of a great work of performance art.