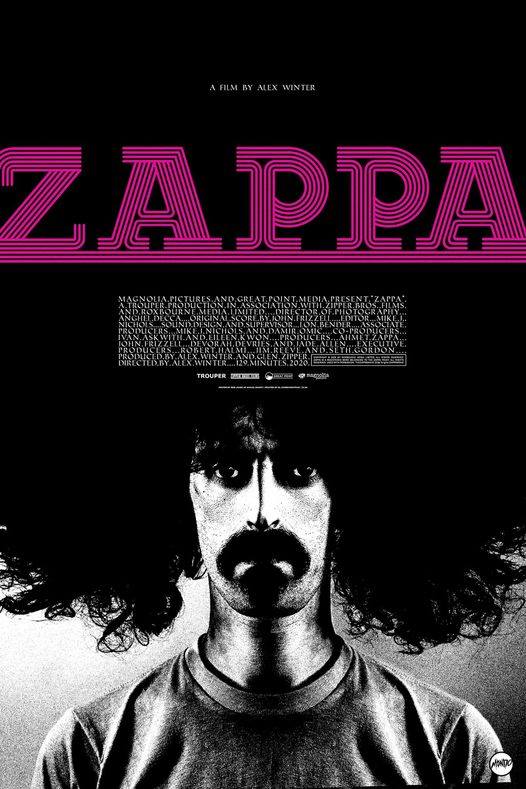 Met him twice and made him laugh once! My cherished memories.

From April 1975 until March of 1988, I saw Frank Zappa play live an undisclosed number of times.

To say he had an impact on my development would be an understatement. He questioned everything. He was cynical. He was satirical and he was brilliant. (The brilliant part never quite rubbed off on me. Lol.)

So sitting at my desk, in our national funk of death and despair, trying to write an upbeat pop review of Alex Winter’s ZFT (Zappa Family Trust) approved documentary “Zappa”, well it’s not going to happen. I’m not looking to rip this movie but I’m not going to sugar coat it, either. I expected more.

Alex Winter (Bill and Ted) approached Ahmet and Gail Zappa, Frank’s widow, for permission to make the movie and to access “The Vault.” For those unaware, Frank recorded basically everything, every show, and every note of his career and archived it. Its existence is what has provided his fans with 53 CDs of Frank’s music following his passing. The vault IS the very reason that has piqued the attention of every Zappa fan. This movie has been highly anticipated (by Zappa fans) for years now.

The movie was initially funded by fans themselves through contributions, in exchange for movie swag and your very own name to roll-up on the big screen. Well the year 2020 has once again pissed a yellow circle around what you get versus what you’d planned on. Not much big screen. No red carpet snaps.

It all started to smell bad back when Ahmet Zappa and Dweezil Zappa had a falling out over the ZFT screwing Dweezil over a merchandising agreement. It got ugly, it went legal and played-out in the press after Gail’s passing. Gail caused the rift. Penalty flag on Gail. I was talking to Gail one night during a “Z” show (Irving Plaza) and told her I’d always support her sons. My loyalty to Frank unwavering. (“Z” was the band comprised of Ahmet and Dweezil Zappa). But truth be told, I stand with Dweezil. It’s just that simple

While I’d like to say the movie is all encompassing, it’s not. If I wasn’t so familiar with Frank’s work and the history, I wouldn’t know how much is missing. And specifically WHO is missing. Frank was a composer first and foremost. But as Frank would explain, if you wanted to be a composer you better have a day job. Otherwise you’ll starve. The one thing that Frank was known for, black letter fact, was this: if you could play in Frank’s band, you were a talented musician. Upper echelon musicians all. Tales of his auditions are legendary and sometimes brutal. If you didn’t get the gig, the only clue you’d get was three words “Window or Aisle?” (for your trip home.) The roster of his band’s alumni is unparalleled. Frank’s legacy, his music, his guitar work has all been kept alive almost singlehandedly by his son Dweezil Zappa. And done so for years now. Did he even have ONE spoken line in this movie? No. Unforgivable. How about Frank’s daughter? She actually co-wrote Frank’s biggest top 40 hit. The story of how that happened is told by Pamela DeBarge of the GTO’s. Why Pamela DeBarge gets quite so much screen time…I digress. For more on the groupie life you can read her book “I’m With The Band”

In this documentary Alex Winter chose two alumni, guitarist Steve Vai and percussionist extraordinaire Ruth Underwood (and a couple of others) to provide their thoughts about Frank. Their insight is welcome. And it’s Ruth Underwood who captured my feeling best in this movie. To hear her (w/Joe Travers) play “The Black Page” on piano was beautiful. Her closing words made me cry along with her. It was very emotional. The movie leverages the treasure trove of archival footage beautifully in some parts and underutilizes it in others. Why Alice Cooper garners as much screen time, I don’t know.

The movie does a good job at providing details of Frank’s younger life and family. It brings into focus what his ambitions were. The movie is cut as to use interview pieces to provide a quasi-narration by Frank. It shows a lot of Frank yet we’re kept at arm’s length. This was the same way most of his musicians felt. Frank Zappa, the boss. The movie does talk about Frank’s shortcomings in the family department. He wasn’t all that faithful. “I like to get laid” he said. “She’s learned to accept it.” – Not our place to judge. This is a “warts and all” movie.

Knowing Frank’s music and voraciously reading his history for over 45 years, it would be unfair of me to hold Alex Winter to my expectations in a two hour movie. And he did a good job. I’m sure I’ll watch it over and over again. I’ll be looking for more each and every time. And like Groundhog Day, it’s always going to end with the hero leaving us way too soon.

Watch it. It was very interesting. If you knew and liked Frank’s work, you’ll like this. You might learn something, too.