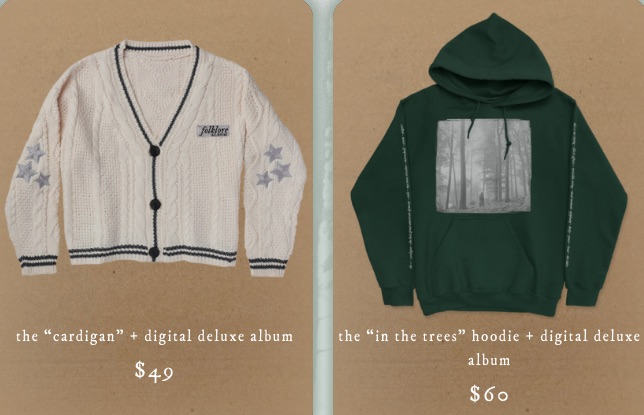 Some of the album bundles offered by Taylor Swift

For the reissue of Elliott Smith’s self-titled album, I was stunned by the different bundles they were offering (some at $249.99, $899.99, $1849.99) and by the different choices, yellow vinyl, black vinyl, CDs,…it used to be simple to buy music, but these days, you have a crazy amount of choices when you decide to buy a new album. For example, look at all the possible bundles offered by Taylor Swift for her new album ‘Folklore’, bundles with socks, cardigan, hoodies, t-shirts, phone case, lithograph, there are tons of merchandise coming with the album in all its incarnations. All artists do that, and the more successful they are, the more diversified the bundles can be,.. signs of the time, one of the possible bundles for Public Enemy’s upcoming album features a face mask.

The bundle war has been raging for a few years. With streaming platforms, physical albums have lost their value, they are obviously hard to sell, and digital albums are almost completely worthless. Remember when Amazon sold Lady Gaga’s brand new ‘Born this Way’ for 99 cents? That was a sign. Artists do whatever they can, and they try to attach an emotional value to something that has lost its monetary value. Why buying mp3s when you can stream ‘Folklore’ on Spotify? But if they come with that romantic cardigan that Taylor Swift is wearing on this photo, sure, why not? In Elliott Smith’s case, it was an even harder product to sell because the album already existed, but photos and a cleaned-up live recording did it, after all, there will never be new photos of Elliott or live shows, so this has to be some very emotional merchandise. Each time, the sentimental card is played, and the album comes with something fans are willing to pay for, like skeleton pants for Phoebe Bridgers’ fans.

Do all these people actually take the time to put the vinyl they buy on their turntables? Or do they put them on their shelves and stream the albums on Spotify? Vinyl is undeniably for collectors, otherwise, why would they release vinyl in so many colors? it’s just a gimmick but it works.

In 2018, Nicki Minaj claimed that a vast majority of people only bought Travis Scott’s album ‘Astroworld’ because it was bundled with exclusive merch. According to the Fader, ‘every day for the nine days following the release of ‘Astroworld,’ Scott unveiled new pieces as part of a 28 item line. His website updated every 24 hours and once the new merch popped up, yesterday’s tees and ashtrays and slides disappeared.’ That was probably genius, every purchase was coming with pre-sale access to concert tickets and a redeemable download of ‘Astroworld.’ The sales were obviously not about the album, it was all about these clothes and concert tickets.

Because of album bundles, some artists have entered the charts, despite the fact that much fewer people would have been interested in their purchase without the offers. This worked because of people’s emotional attachment to a shirt or a pair of socks, or the possibility to have access to ticket concerts (when they were happening). This was what Nicki Minja was complaining about, and if charts are supposed to measure album sales, they are obviously not doing that. Another good example could be Madonna’s ‘Madame X’ which started number 1 in the charts on the first week because the bundle was offering a ticket for her concert, but had already fallen to the rank 77 on the 2nd week and was off the charts on the 3rd week. Concert tickets are one thing people are willing to pay good money for. According to a recent podcast, in 2019, out of the 41 albums which went number 1, 20 had bundles, and in 2020, out of the 20 which went number 1, 11 had bundles, which is very telling.

However, on July 13, Billboard has announced a few new rules that will change this. Now Billboard has decided ‘to eliminate the practice of counting albums bundled with merchandise and concert tickets on its album and song charts altogether.’ ‘All albums bundled with either merchandise or concert tickets must be promoted as an à la carte add-on to those purchases in order to be counted on the charts (i.e. a separate item added to a shopping cart on its own). Those included as part of a baked-in, single-price option (along with the merchandise or ticket), with the album cost undisclosed to the consumer, will no longer be counted. It is Billboard’s belief that the resulting charts will more accurately reflect consumer choice.’

Also, physical albums or singles that are bundled with digital downloads won’t be reported as digital sales, and this should eliminate ‘the practice of ‘spontaneous’ non-manufactured items being used to influence first-week chart rankings.’ Only when the physical item is shipped, will it be counted in Billboard’s official tallies. Many artists were indeed offering an instant digital download with vinyl and CDs, that were often shipped weeks or months later, as a tactic to boost their chart positions. This will not be possible anymore.

It’s a significant change, and if bundles will still be there because they are lucrative for artists, they will not help them anymore to climb the charts.