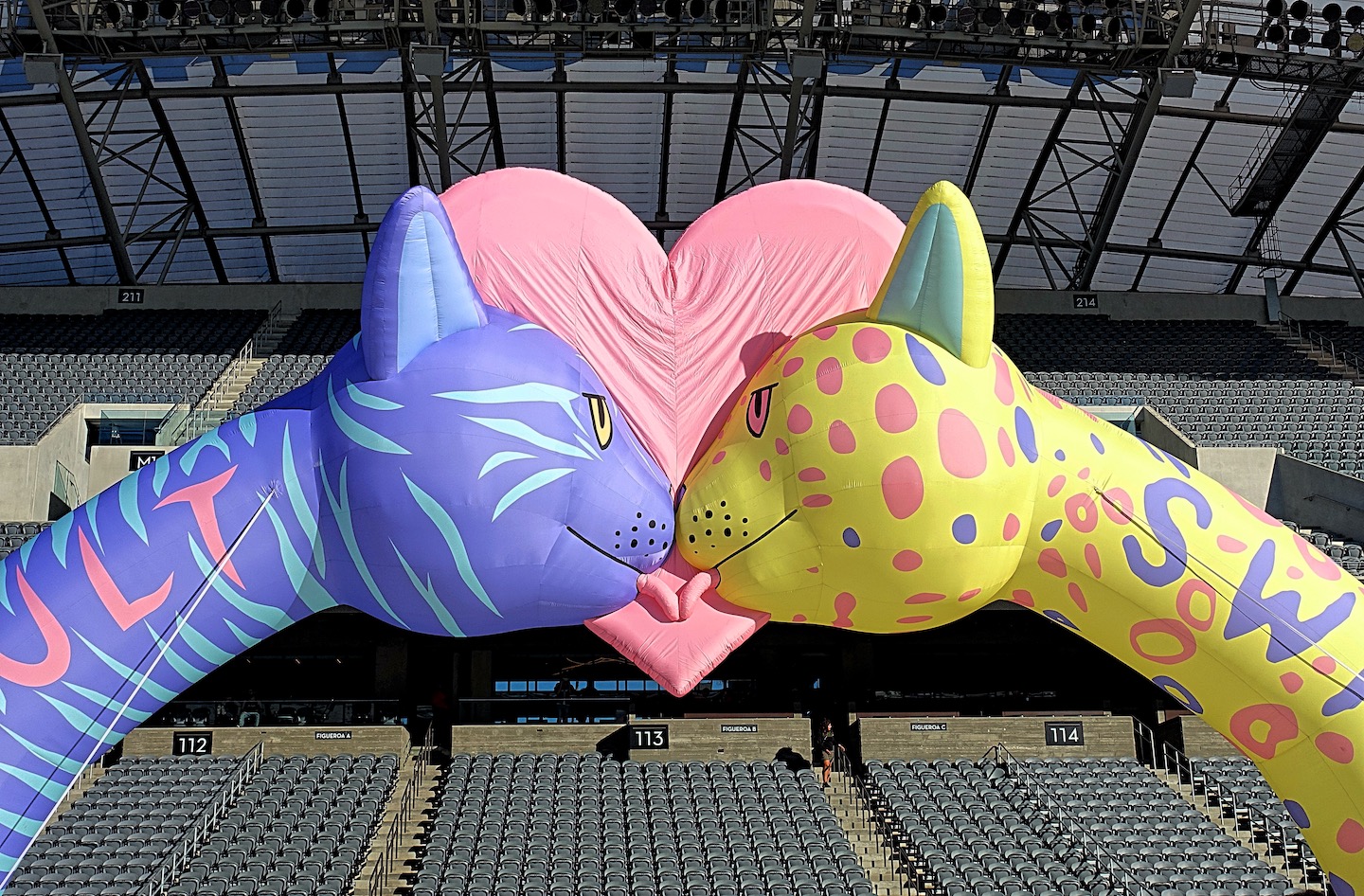 Yesterday, I walked out of my usual comfort zone: if I never watch Adult Swim — I only know a few shows like American Dad, Family Guy, Rick & Morty, because they air on FOX —  I attended the Adult Swim Festival. It was a bit like landing on another planet with an alt-culture… Who are Dethklock, Black Jesus, MF Doom, Toonami, Moltar, Frylock, The Boondocks, Robot Chicken, Mr. Pickles,…?? Adult Swim has built a culture of fictional characters through cartoons and sitcoms and has also widened its audience’s interest through partnerships with many independent music labels (such as Stones Throw Records, Ghostly International, Definitive Jux, and Chocolate Industries) to co-produce albums.

So a (music) festival was a natural extension of their brand and their 2-day fest inside the brand new Banc of California Stadium was actually several festivals into one: an Adult-Swim-oriented festival with interactive games, virtual and high tech experiences, special screenings and discussion panels, and a music festival with two stages where top music acts performed non-stop for two days.

I mostly concentrated on the music, I didn’t go to the Rick and Morty S4 screenings at the BabyCat stage, and barely had time to check the ‘attractions’ like The Rickflector, a machine that transported fans into the animated world of Rick and Morty. I only entered the Meatwad Dome once, and caught one of the numerous 360 degrees of Adult Swim favorites, whereas they were screening a new one every 15 minutes. Meanwhile, festival attendees didn’t get enough of the slides on the tongue of a giant inflatable Morty Slide and never stopped riding the Cat Joust or the giant hot dog, some bucking-bronco-style mechanical attractions. The festival looked like a fairground for adults, an occasion for grown-ups to indulge into kid’s stuff, while wearing the outfit of their favorite Adult Swim characters… and there were plenty of these cartoon ‘weirdos’ around.

Despite being based in Atlanta, the popular late-night brand launched its festival downtown LA last year, and the event got even bigger this year, with this stunning new location inside the Banc of California Stadium, a 22,000 capacity venue, freshly built next to the Los Angeles Memorial Coliseum. The place, with its jumbo video screens, was also featuring high-tech amenities, which were used to present Adult Swim content and special screenings.

I attended the festival on Saturday and got a full taste of the musical line-up curated by Jason DeMarco, the network’s senior vice president. The choices of artists reflected the channel’s taste-making so that the musical artists were either some acts who have become big because of songs featured on an Adult Swim program or bigger acts, eager to develop a relationship with the brand.

Since they both played on Friday, I missed Dethklok, the death metal band behind the show ‘Metalocalypse’ or Flying Lotus who brought an MF Doom masked impostor (Hannibal Buress of the Eric Andre show) on stage during his set, but I saw most of the Saturday line-up, which was almost exclusively focused on hip hop and rap. It was not a surprise as hip hop has become the dominant genre in music today, but besides Negative Gemini, an indie electropop band fronted by  Lindsey French, and Helado Negro, an Ecuadorian-via-Florida band playing heartfelt-dreamy slow melodies with violin, soft sax and a sort of Brazilian/Devendra Banhart flair, the rest of the day was restlessly beaten by many rap rhythms. What a contrast these two acts were, as they sounded like two image-breakers among this abundance of rap acts.

If I got some education after attending the festival Rolling Loud a year ago, I am still one of the last persons to ask about hip-hop! The young generation’s adoration for the genre is undeniable, rappers have become the new rock stars, as we live in a world where 2 Chainz (one of the headliners of Adult Swim Festival) has almost 3 times the amount of Instagram followers than iconic Paul McCartney (7.6 M versus 2.7 M).

Saturday’s lineup included many female rappers, such as CupcakKe, Tierra Whack and Rapsody, and they couldn’t have been more different. CupcakKe, whose every single song ended with the punch word ‘Bitch!’, has to write the most graphic rap you may ever hear, at least coming from a woman. She was welcomed on stage by a lot of ‘I love you CupcakKe!’ shouted by multicolor-hair girls, and I later understood why the crowd was so happy to see her. A few months ago, Elizabeth Harris (her real name) announced her retirement under the pretext she was ‘corrupting the youth’ with her raunchy rap songs. However, she miraculously came out of retirement a few days ago, just in time for the festival. Her lyrics were so dirty that they were hilarious, she rapped about sex and blowjobs and sex, comparing her private parts to a vending machine and a million other things, with some ridiculous but always funny imagery, handling her partner’s private with some imaginative strategy ‘But I can’t fuck up my nails (I can’t)/So I’ma pick it up with chopsticks’…

In comparison, Rapsody was a women’s rights fighter – not saying that CupcakKe wasn’t one though – with a style inspired by black female heroes of the past and an Angela Davis patch on her black jumpsuit. It was black woman power all over again, as she was rapping with an unstoppable determination. Signed on Jay-Z’ Roc Nation, she has released her third album, ‘Eve’ this summer, she had the allure of an activist fighting for freedom and even brought a young man on stage to teach him how to treat his future girlfriend.

Tierra Whack was another funny act, dressed as a sort of Dr. Seuss-inspired colorful cartoon, or a clown-like fantasy character, it was just entertaining to look at her moving on stage in this outfit and horn-like multicolor hairdo. Her rap had very pop-oriented melodies with really playful hooks, and nothing seemed to be taken very seriously in this ‘Whack World’, the title of her album. Back up by a DJ named Zach, she brought some fans on stage and a potato with a human face, just like the one used in the video for her last song ‘Unemployed’ where she plays a chef slicing potatoes.

The balance between men and women was impressive but the men were still the stars of the night with 2 Chainz and Vince Staples headlining. Early afternoon Clipping. blew away a few minds with their frontman’s incredibly fast flow over unusually dark electronic industrial music, which turned them into a usual rap act. Rapper Daveed Diggs’ flow was so impressive that it was almost hard to believe he was a human being at times.

Rapper Freddie Gibbs and producer Madlib behind a computer brought a very large crowd as soon as Gibbs started his very determined rap with deep vocals commanding the place like no other. ‘I’ve never been to a soccer stadium’, he said while rapping in front of a cartoon showing the Hollywood sign in flames and zebras (the cover of his last album ‘Bandana’). There were a lot of ‘Fuck the police‘ and other ‘Make some noise motherfuckers’, as he seemed very at ease for a first time, with a foot in the streets and a foot in his father role, as he came on stage carrying his young daughter in his arms.

If confidence is a common denominator among rappers, 2 Chainz was not missing that specific trait while he was constantly asking us to put the phones up…take this Jack White and Madonna,  at least a musician who appreciates fans filming and photographing! I didn’t know much about the Atlanta rapper, but he seemed to embody successful gangster rap, rapping about money and strippers, covering most of his friends (according to the setlist he covered Drake, YG, Lil Wayne, A$AP Rocky and Chance the Rapper) taking the stage like someone headlining a victory parade… ‘I appreciate myself’ he said, while rapping about a 2-dollar bill: ‘Like a two-dollar bill/I’m rare, I’m rare’

Vince Staples was far more modest, but nevertheless fierce, rapping like a man on a mission, barely visible under very low light and a dense smog that had suddenly invaded the stage. Even without knowing his work, his athletic run around the stage and his confident rhythmic flow had all the marks of someone with an important message to deliver. He was rapping in front of several piles of TV sets showing vintage tv series, while his set was announced as the Vince Staples show, maybe a way to attract everyone’s attention. His witty comments and lyrics depicting the reality of his hometown Long Beach, like the omnipresent police brutality and gang violence, were embraced by a crowd reciting the lyrics along.

Between the rap acts, The Eric Andre Show Live! entertained the audience with its messy satirical humor and prank tricks. Comedian Eric Andre played a talk show host from hell with surreal humor and a sort of Tourette syndrome making him jump to the most unexpected and outrageous reactions and absurd moments. It was sometimes gross and violent, sometimes funny or repulsive, a wacky show with food fights and a touch of Jackass meets Sacha Baron Cohen.

Jamie XX closed the festival because you always need an electronic dance rave party at night, but he seemed to have little to say after all these hip hop acts.

For its second year, the Adult Swim Festival had all the allures of a big event for a young hip crowd, and among the multitude of things to do at once, the musical acts seemed to have drawn the largest crowds at night. Despite its carnival rides and cartoonish environment, the content of the festival was definitively addressed to adults, at the image of the network, and as an outsider of this Adult Swim alt-culture, I may have only scratched the surface. 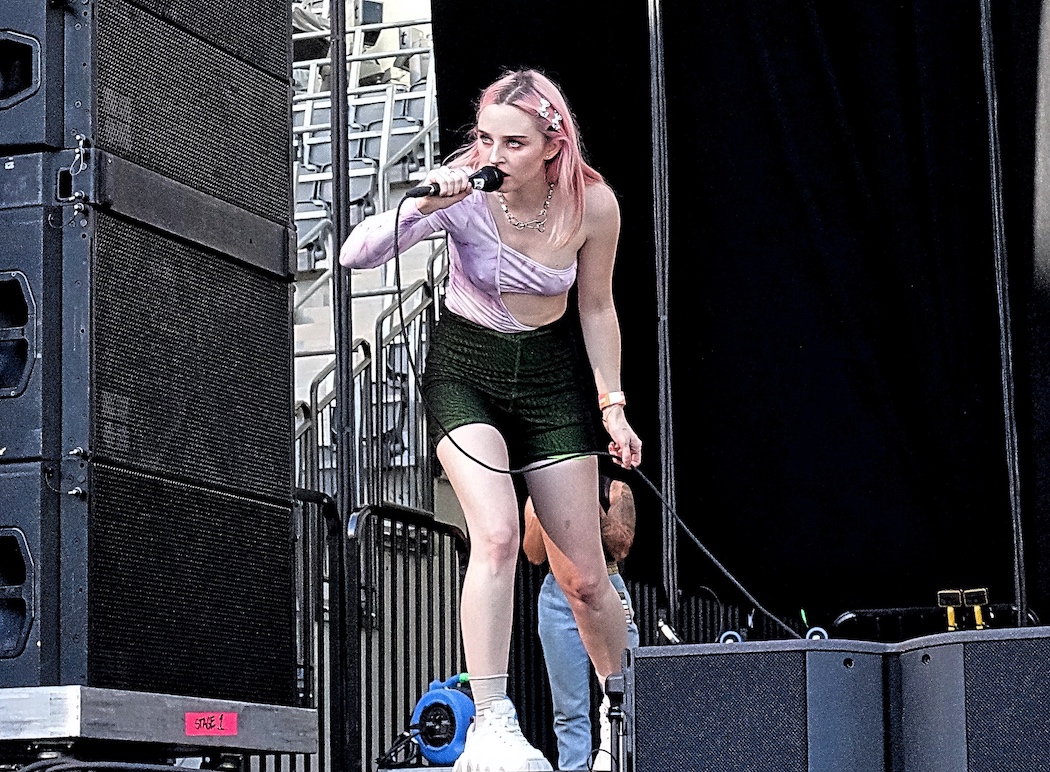 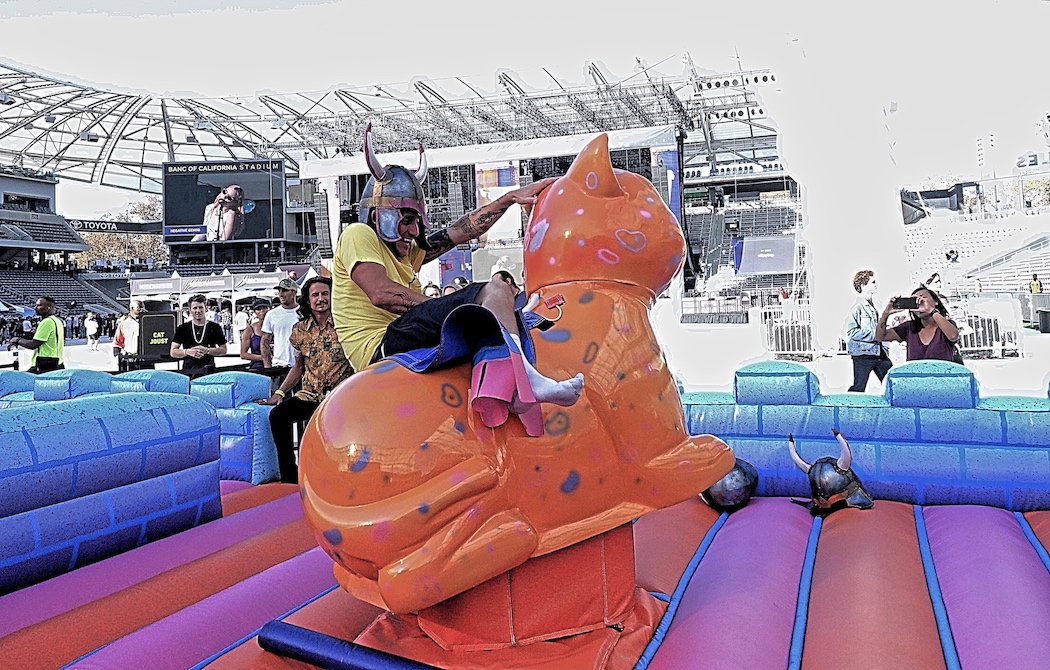 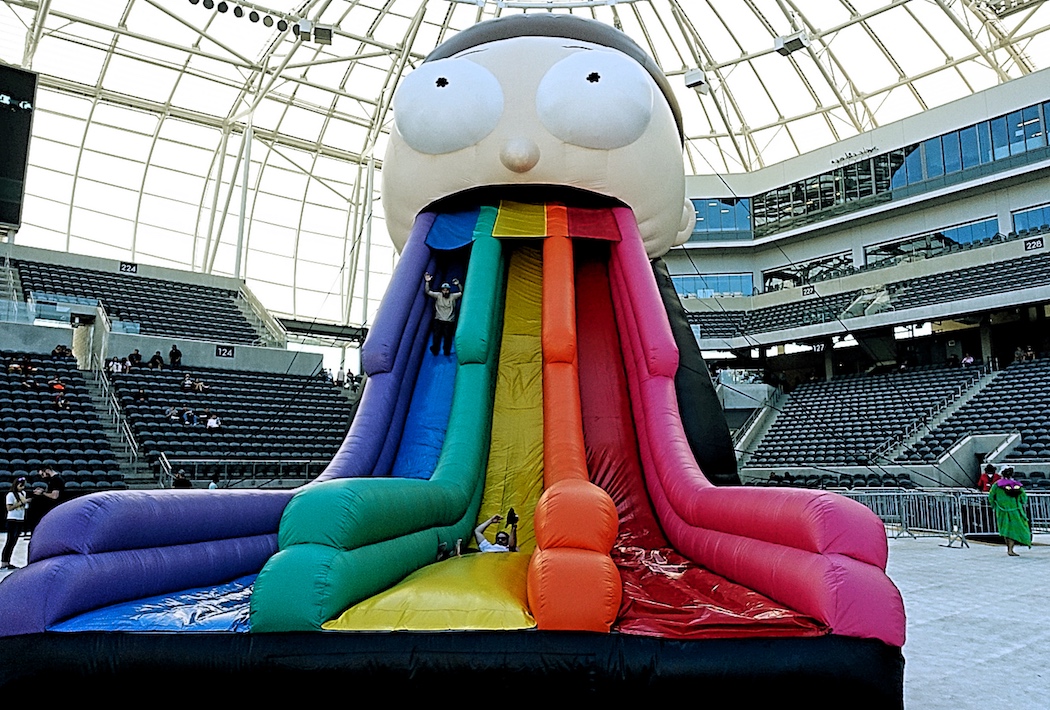 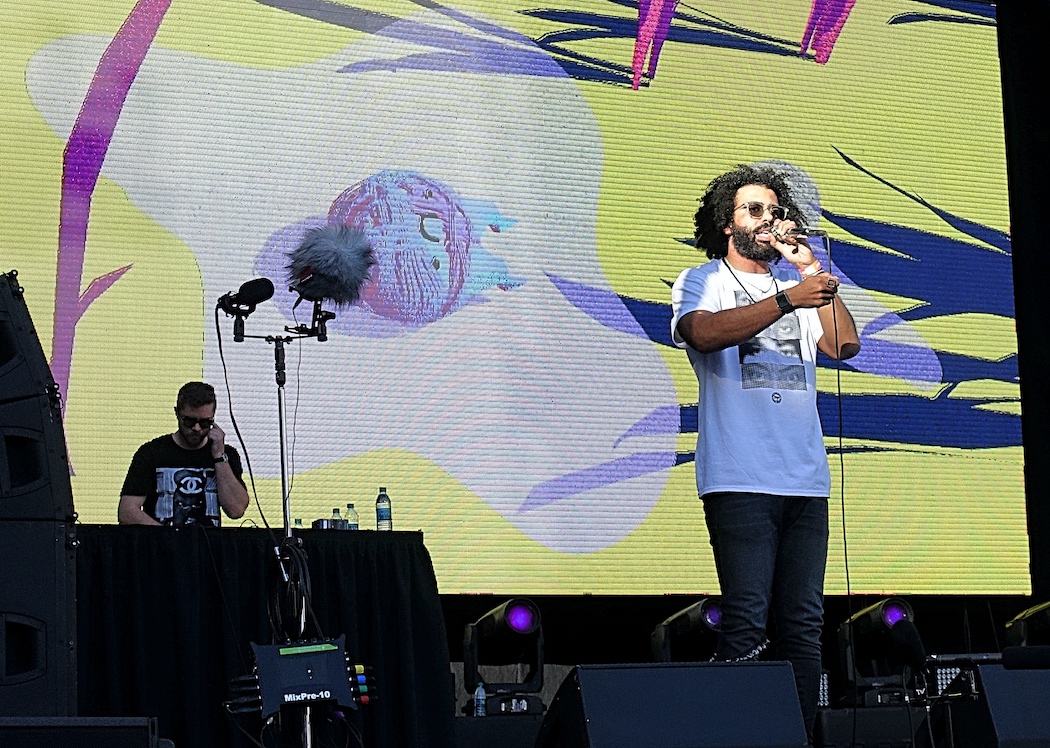 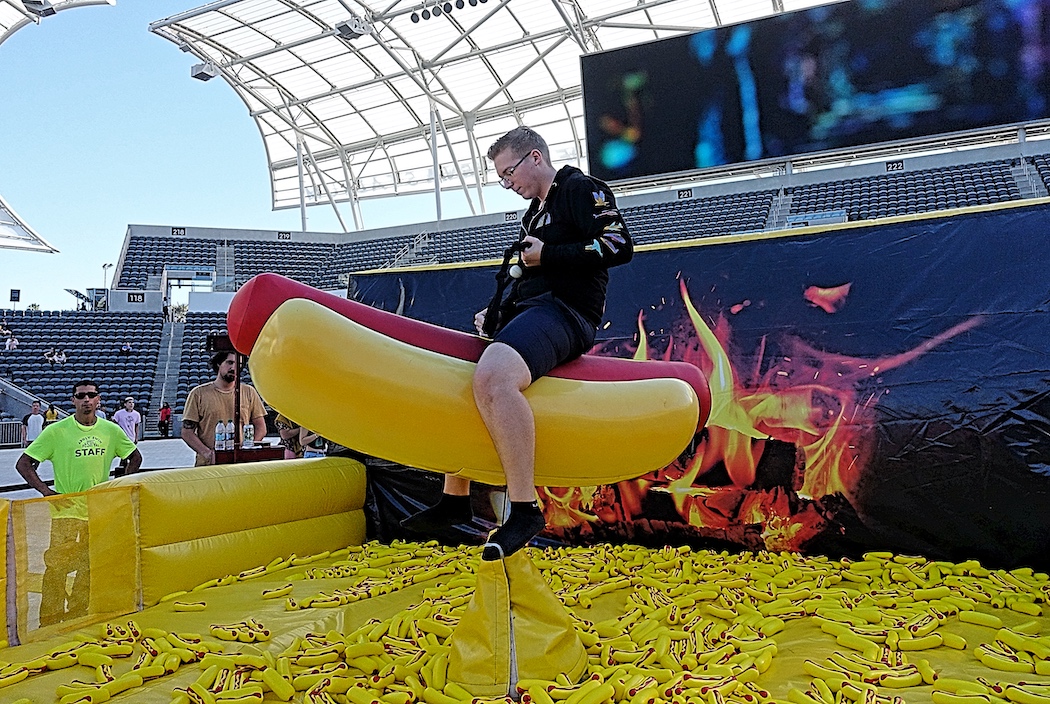 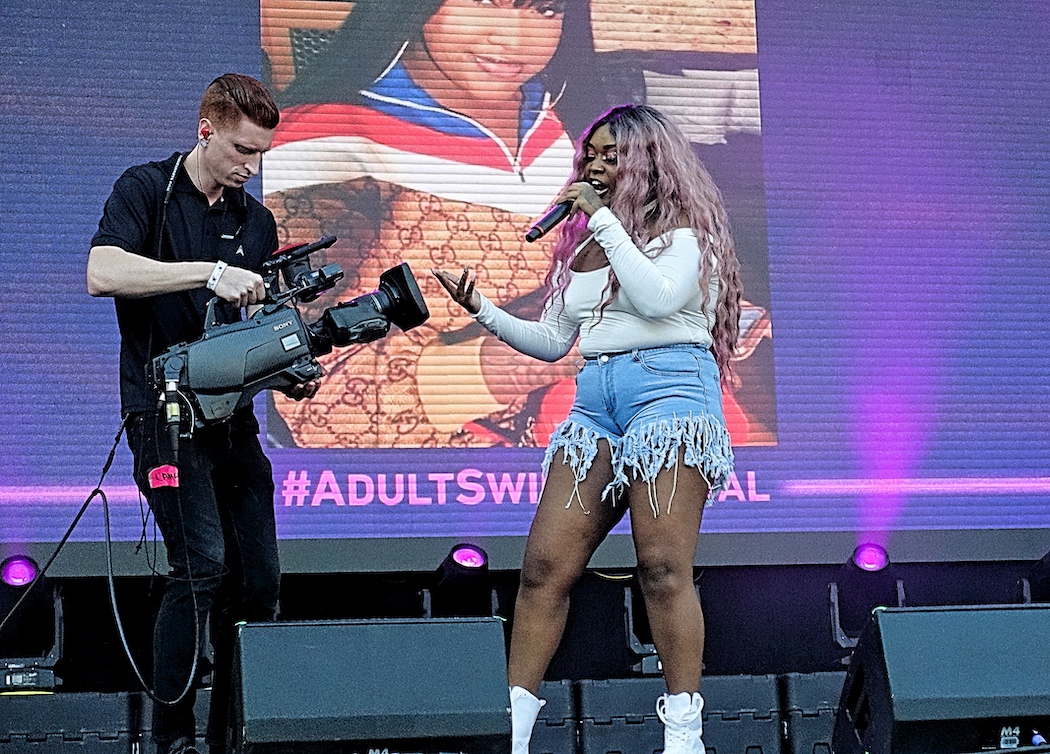 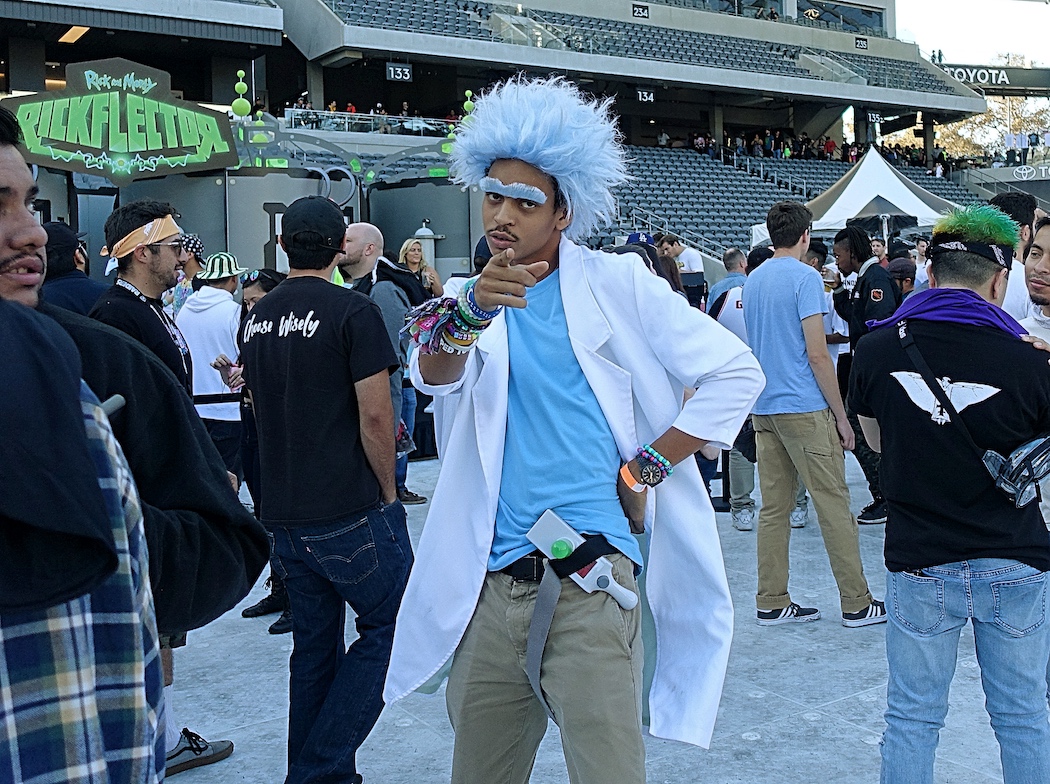 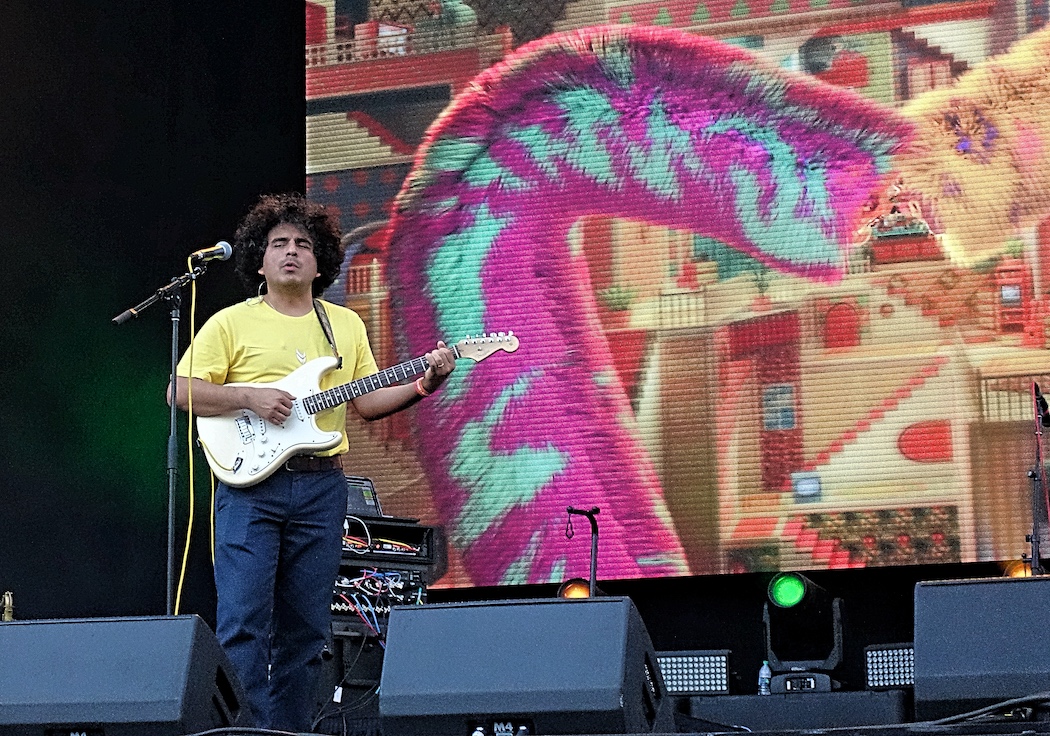 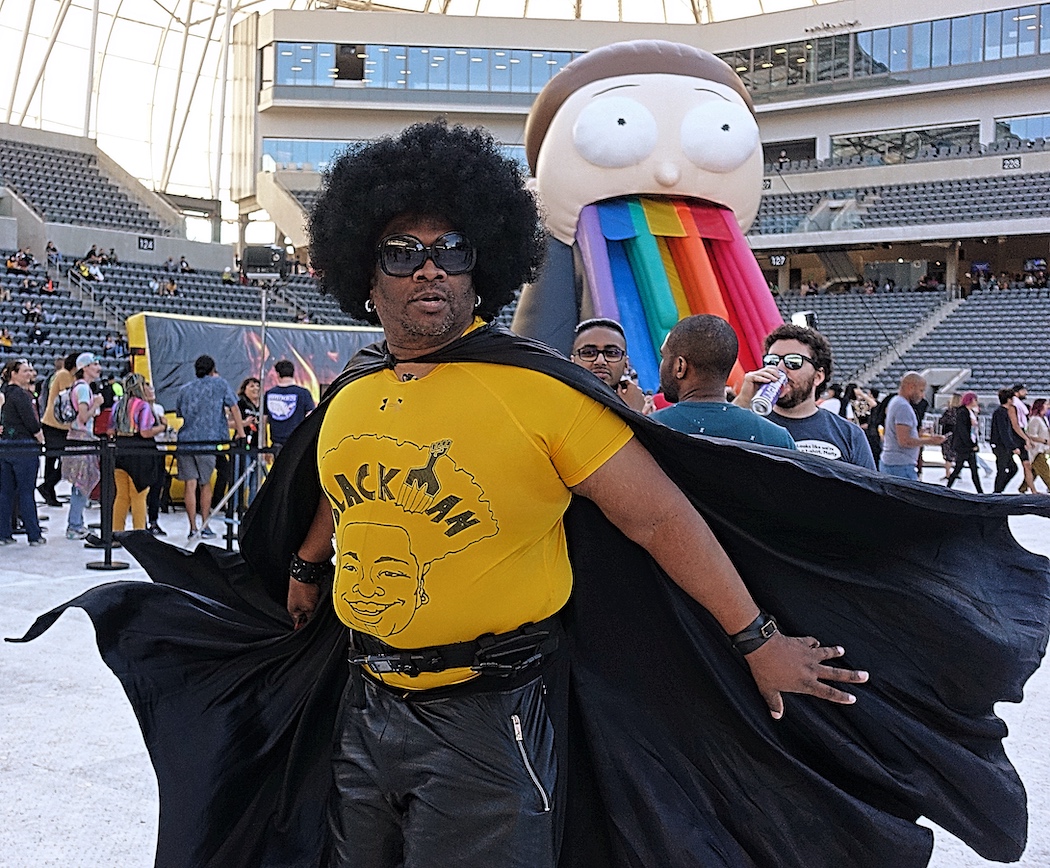 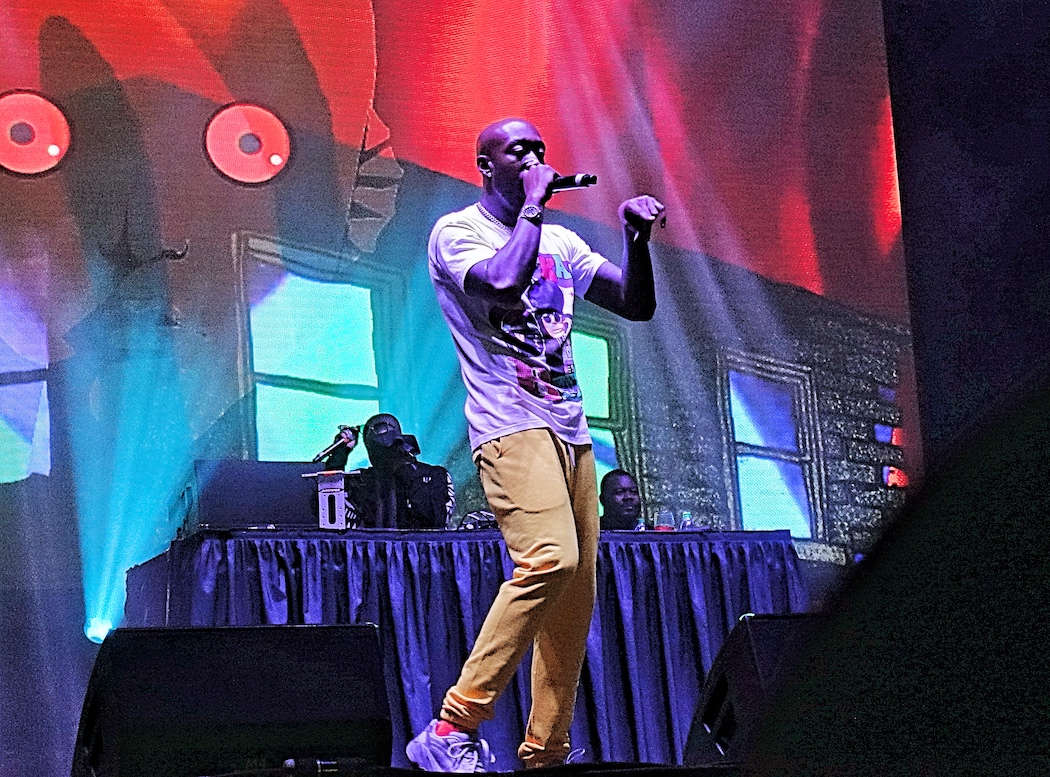 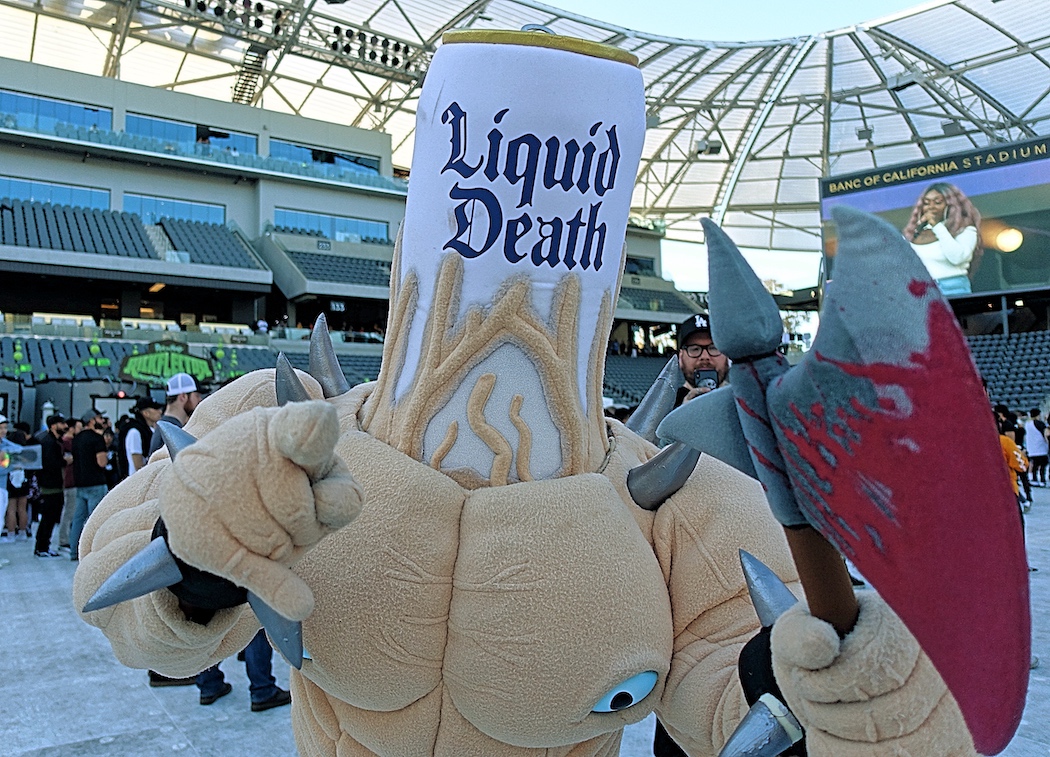 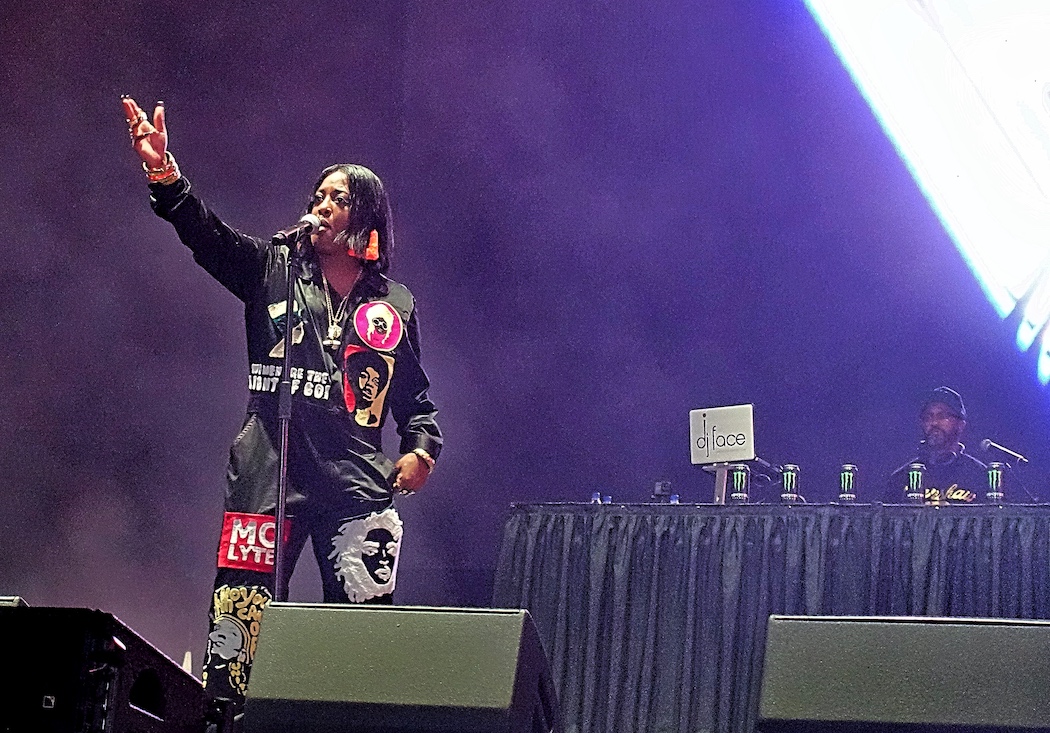 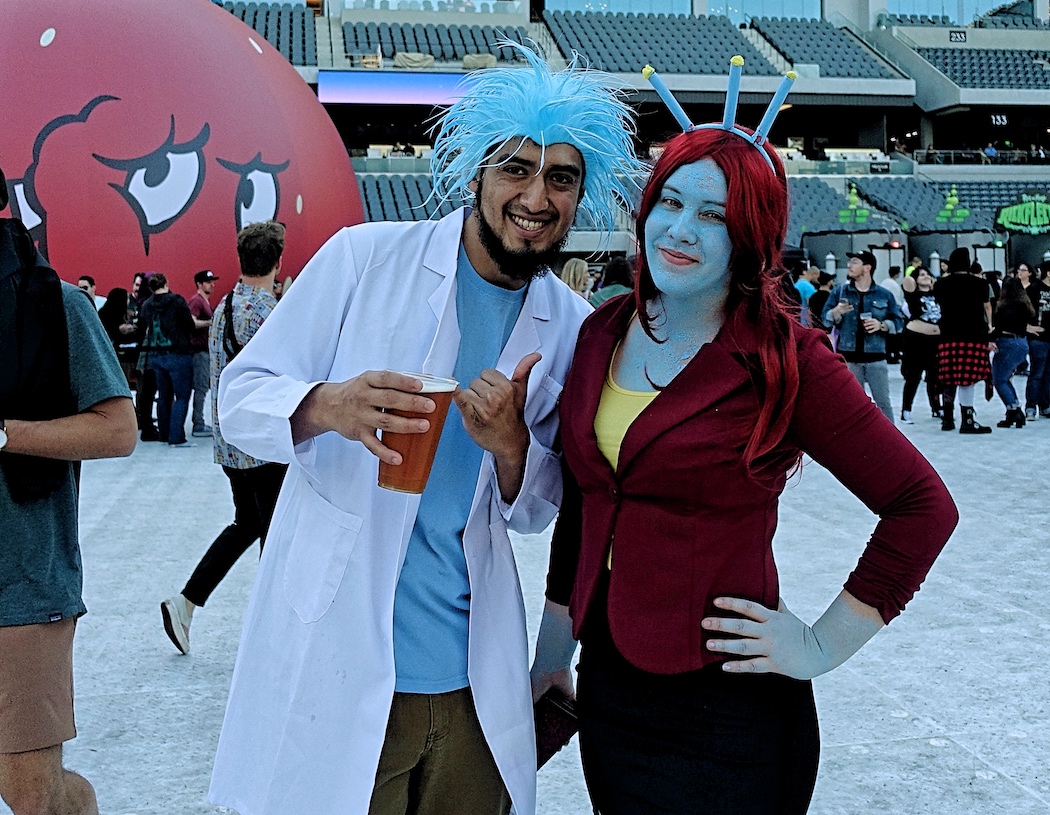 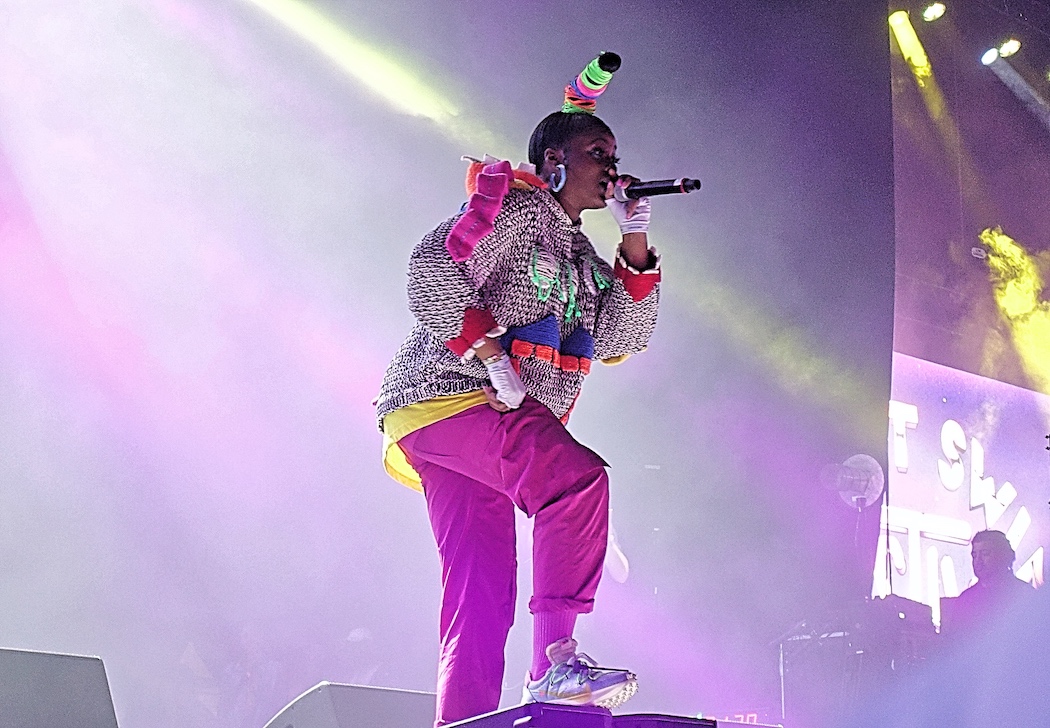 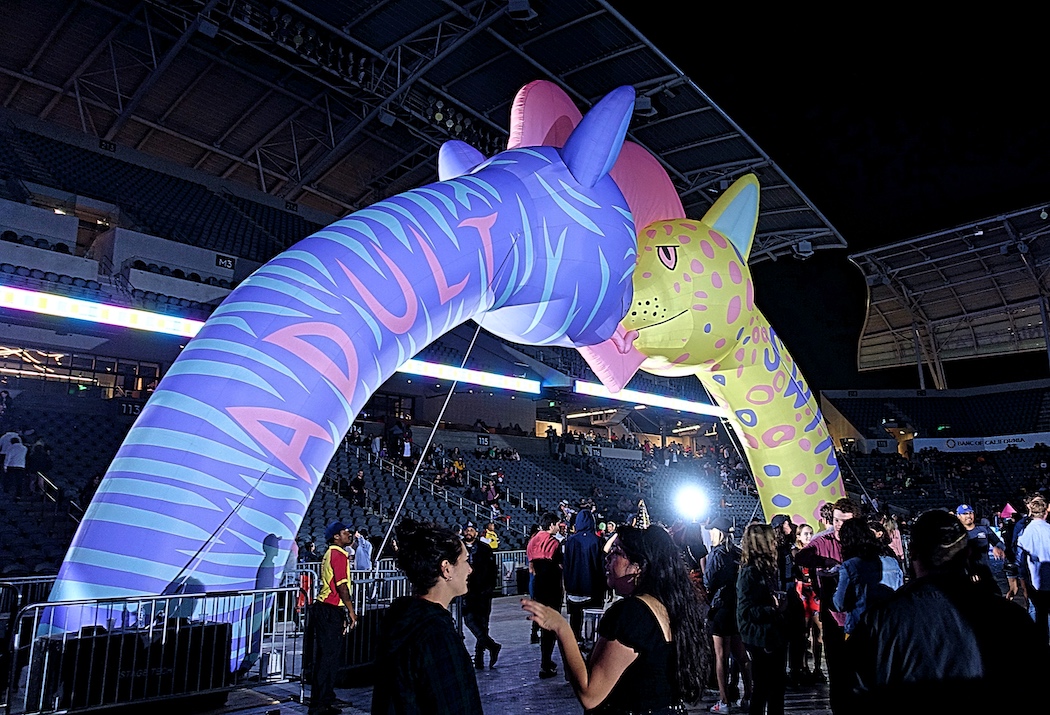 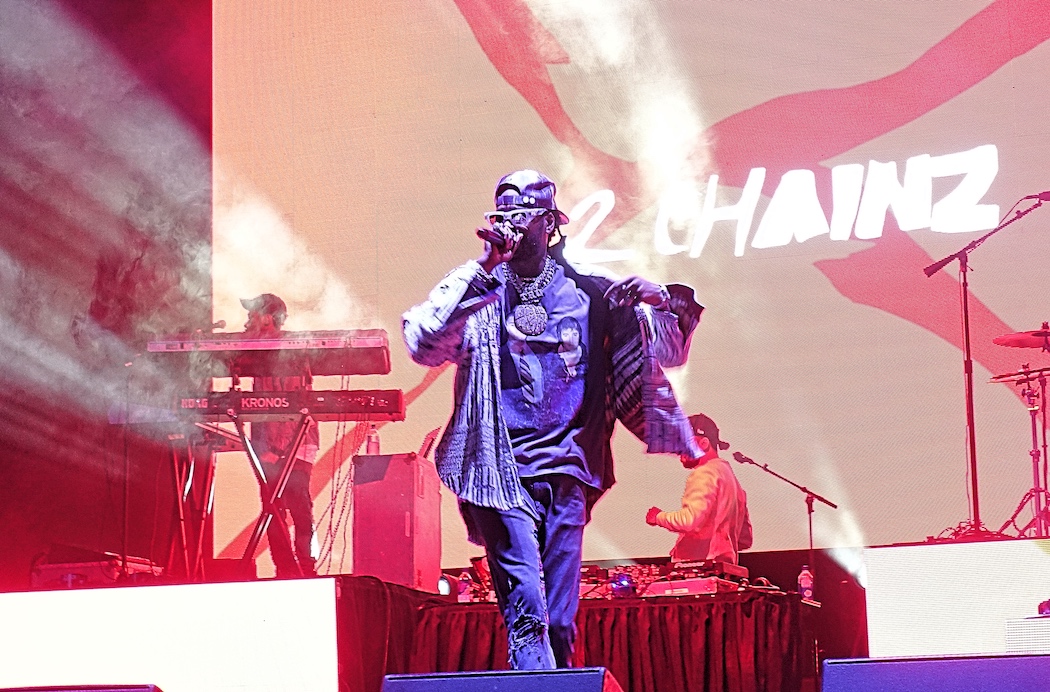 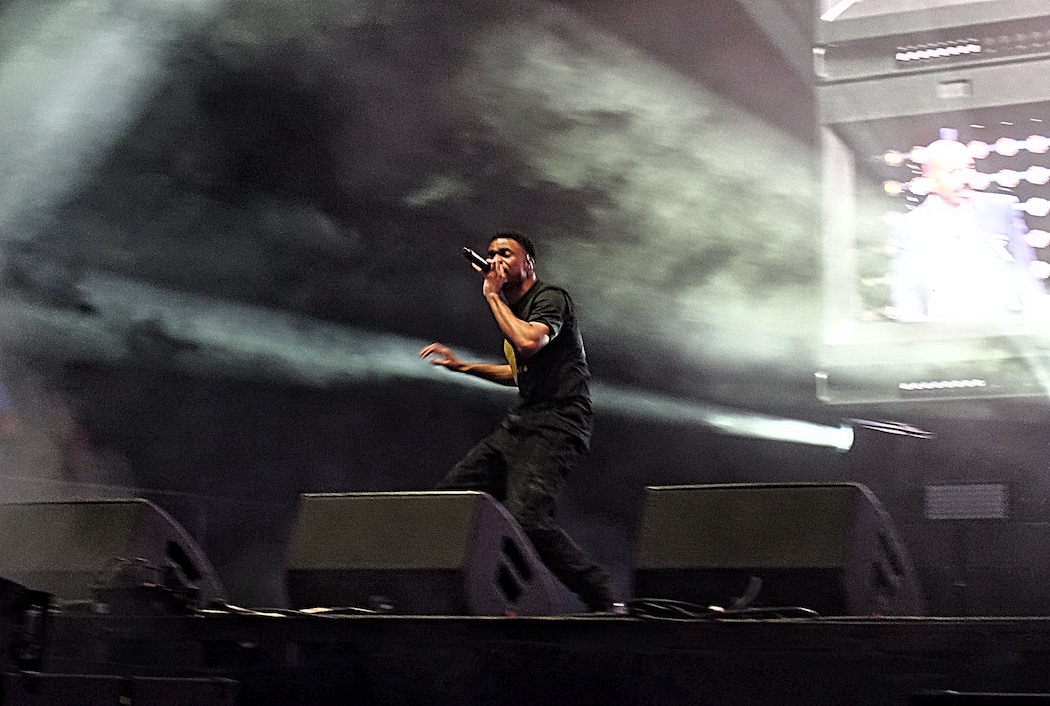 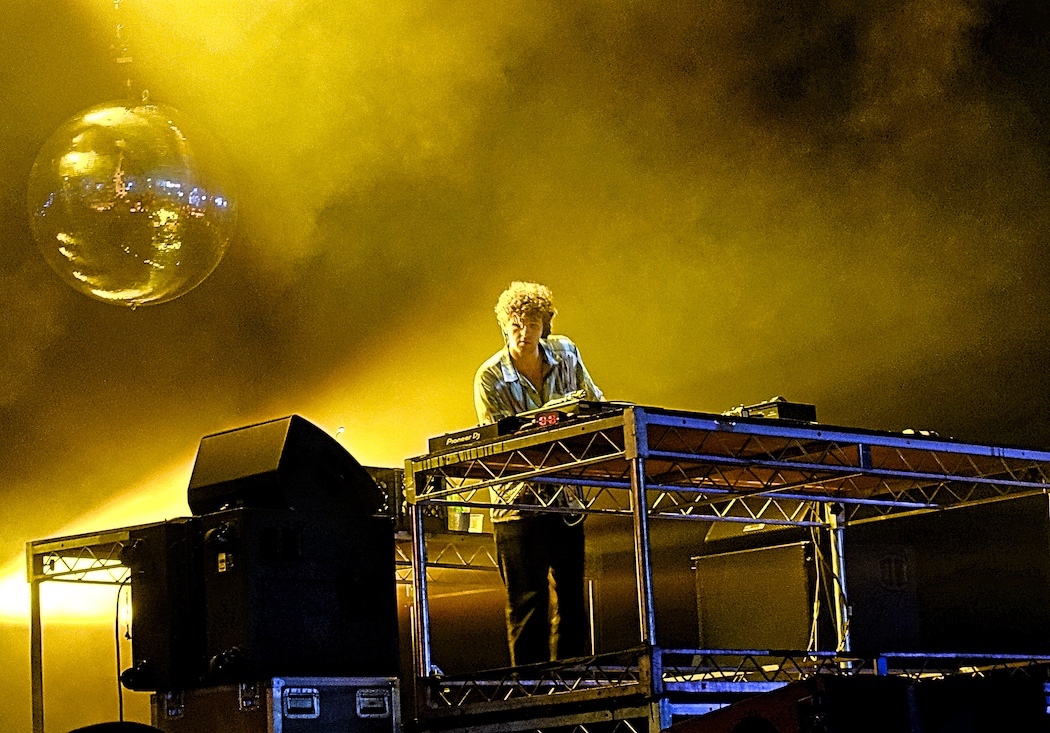