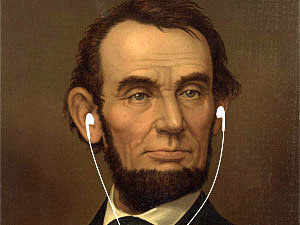 In an attempt to uncover the musical tastes of people in power, why not turn to the past for a while? In honor of the Lincoln project, that I have followed very closely during this election, why not enquiring about the tastes of our 16th president, Abraham Lincoln himself?

Contrarily to the current president, Lincoln knew how to appreciate the arts and enjoyed all sorts of music, he was a sensible person and a true music lover, and for him, music was ‘a form of therapy, a panacea, a way to touch the soul of beauty.’

Very early on, he was exposed to music as his mother, Nancy Hanks, used to sing ballads such as ‘Kathleen Mavoumeen,’ ‘Old Rosin the Beau,’ and ‘Annie Laurie’ to him. In the 1800s, we are obviously not talking about recorded music, as we are 50 years before the 1st sound was ever recorded. There were no vinyl records or players, and music was exclusively something that was played live. Lincoln had to find a band or a stage performance if he wanted to listen to music, and this is what he did many times, to enjoy the most popular form of music at the time: opera. And Abraham Lincoln was a true opera lover.

According to NPR, Lincoln liked Friedrich von Flotow’s romantic opera ‘Martha,’ a piece known for a famous tenor aria, and he even had it performed during the festivities for his second inaugural. Lincoln attended the opera more than thirty times during the four years he was in the White House, and he invited performers to entertain him and his family at the white house. When other presidents golf all-day-long, Lincoln was criticized for spending too much time at the opera! He attended the US premiere of Verdi’s ‘Un Ballo in Maschera’ in 1861, Donizetti’s ‘La figlia del regimen’ in May 1862, and very shortly before he died in 1865, he attended a performance of Mozart’s ‘The Magic Flute’ at the National Theatre in Washington.

Lincoln’s love for opera had even repercussions on the Marine Band led by Francis Scala who created many band arrangements of popular operatic excerpts such as the ‘Soldiers’ Chorus’ from Gounod’s ‘Faust,’ a favorite of Lincoln’s.

Washington, D.C. native Meda Blanchard was the first opera singer to ever perform at the White House in 1861, starting an important American cultural tradition. There, she sang the famous ‘Casta Diva’ from Bellini’s ‘Norma’ and two of Lincoln’s favorite ballads. Music was deeply meaningful for Lincoln.

He also had a special connection with ‘Dixie,’ a song that has a very different meaning than it did when Lincoln first heard it in 1860. effectively, ‘Dixie’ took on a different significance when the South adopted it as an unofficial national anthem. But when the civil war ended on April 10, 1865, Lincoln declared: ‘I have always thought ‘Dixie’ one of the best tunes I have ever heard. Our adversaries over the way attempted to appropriate it, but I insisted yesterday that we fairly captured it.‘ Lincoln attempted to unite the country with music, as a band played Dixie,’ and `Yankee Doodle.’