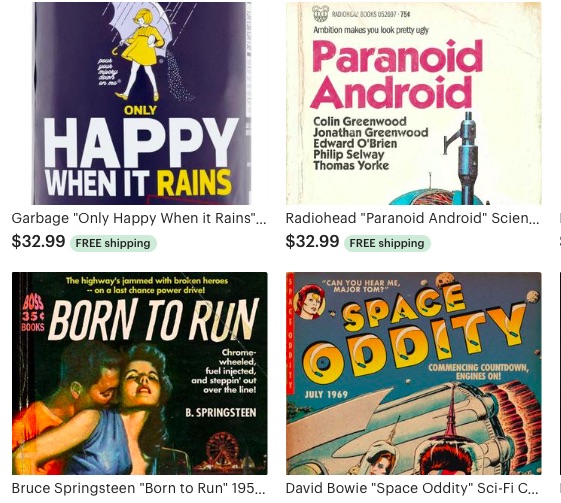 I have never bought anything from this online store, but an Etsy artist named Todd Alcott has a truly remarkable series of illustrated songs. From Talking Heads to Bowie, Pink Floyd, Beck, The Beatles, Radiohead, Bob Dylan, Bikini Kill, Bruce Springsteen and many others, he covers all the classics, old or new, transforming the song into a poster for a classic ‘70s movie (Radiohead), an antic postcard (Pink Floyd), the cover of a Penguin Books novel (Morrissey), an issue of the French magazine Cahiers du Cinema (Talking Heads), a mid-century advertisement (Pink Floyd), or even a ‘70s wrapping Frito bag (Beck) one of my favorites.

However, the possibilities seem endless, and I honestly cannot pick one: Radiohead’s ‘Myxomatosis’ is re-imagined as a 1970s cat book, Elvis Costello’s ‘Alison’ is re-invented as a Carter Brown mystery, Joy Division’s ‘Atrocity Exhibition’ is drawn as a Victorian circus poster, David Bowie’s ‘Starman’ is re-imagined as the cover of a 1930s Planet Stories pulp magazine, and the list goes on and on…

Each illustration incorporates some of the lyrics of the songs, with the appropriate font and color to make the final result look like the real thing. There’s certainly a lot of nostalgia attached to each composition, as they all looked as if they had been drawn in the ‘50s, ‘60s, and ‘70s, but there is also a lot of humor and inventiveness, as each illustration is carefully picked to fit the mood of the song. For example Courtney Barnett’s ‘Avant Gardener’ becomes the packaging for a store brand of allergy medicine, Hole’s ‘Celebrity Skin’ becomes the cover of a 1950s Hollywood gossip magazine, The White Stripes’ ‘Seven Nation Army’ becomes a Soviet-era World War II poster, The Beatles’ ‘Good Morning Good Morning’ becomes a box of Kellogg’s Corn Flakes, Radiohead’s ‘Kid A’ becomes the cover of a 2000 Ikea catalog, and Joni Mitchell’s ‘Big Yellow Taxi’ becomes the poster for Martin Scorsese’s classic 1976 movie Taxi Driver.

See it yourself, explore this crazy store of ‘cultural mashups’, it’s a lot of fun, and the prices are not outrageous!