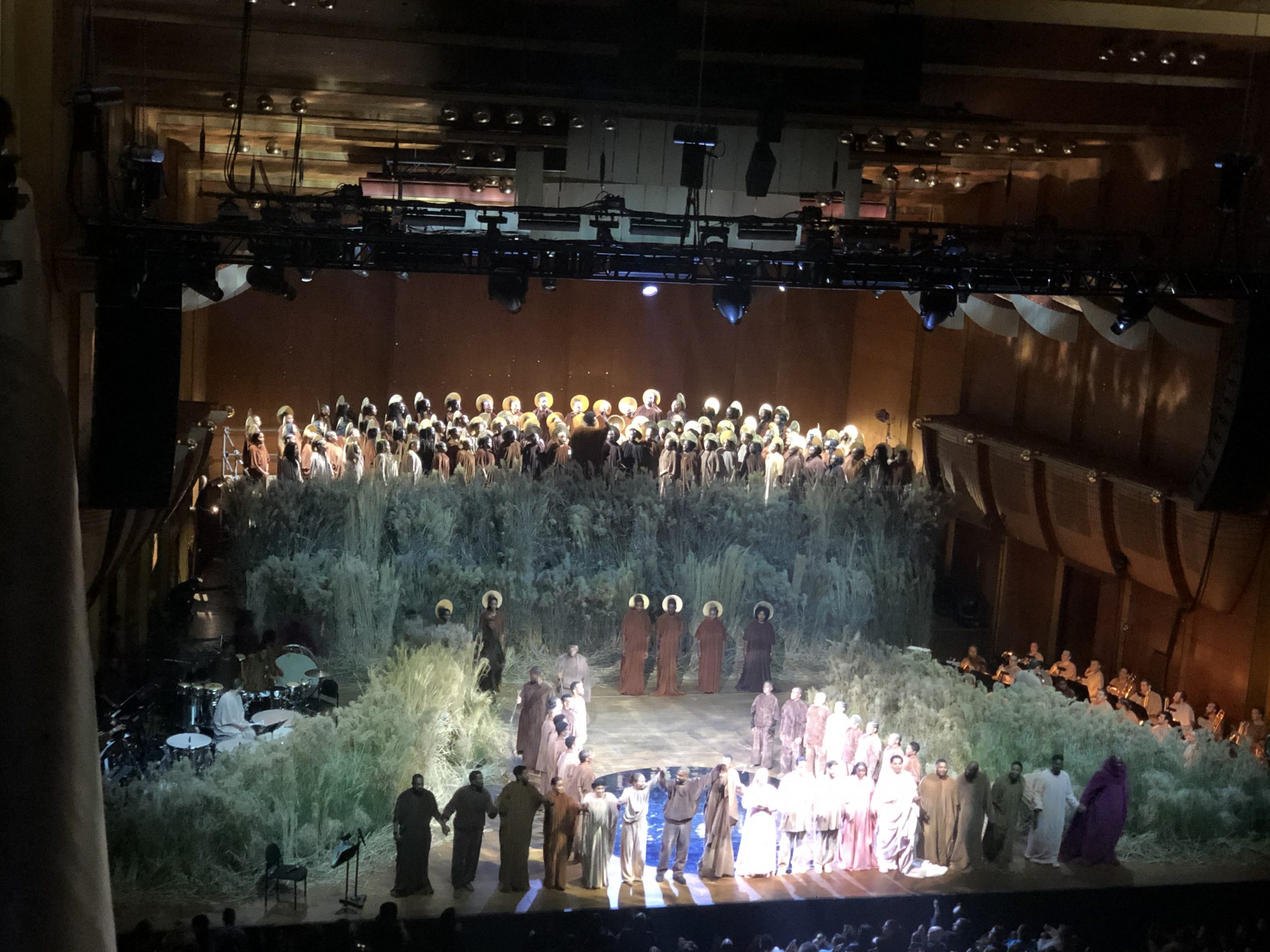 There are things about Kanye West’s Christmas story opera “Mary” that are so amateurish you’ve seen better High School productions, but the most important thing, the music, isn’t one of them; the interspersing of “Can’t Tell Me Nothing” into the Sunday Service choirs high end Christian hymns arranged for voices and brass, is as great a moment as Kanye has ever given us. Up to his eyeballs in Christianity, preaching the word wherever he goes, bringing his children and wife to New York City and presenting “Mary,” which takes us from Elizabeth, Mary’s cousin, late life pregnancy to Joseph returning to Nazareth after being chased to Egypt with Mary and baby, Kanye has one subject and it is a game of thrones (his for His) and it doesn’t work. But it is excellent solely because  Kanye presents it with some of the most beautiful music of his career.

West, rocknyc.live artist of the decade, matters not because he is bi-polar or riddled in guilt over his mother’s death, or married to a reality star. None of it counts, what counts is everything else. West hasn’t made a musical mistake in the 2010s, from “Runaway” to “Closed On Sunday,” he has remained at the top of his form while Beyonce, Taylor Swift, Jay Z, and Drake have faltered, Kanye hasn’t come close. This year word began to drift down that West had found God, and was performing Sunday Services from Coachella to the Apollo. The David Letterman interview found Kanye presenting his Services to the public, West’s first opera  Nebuchadnezzar,  was performed at the Hollywood Bowl, November 24th, and “Mary” was presented at Art Basel on December 8th. Reviews for “Nebuchadnezzar” were dreadful and for “Mary” better but not that much better. Even last night’s performance (December 22nd for those of you visiting from the future), couldn’t get past the presentation, couldn’t get past West’s awful narration, and despite the visual beauty (and nobody painted silver from head to toe like Art Basel), the evening seemed heartfelt yet amateurish.

The doors were at seven and “Mary” was meant to start at eight. I arrived at 745pm just to be on the safe side, and 90 minutes later the lights dimmed as Kanye’s wife and three of his children were seated in a private box .A member of the audience shouted, “I love You, Kim” and daughter North West responded “I love you, too” starting one of those things you never thought you’d hear at a West presentation.  The show wasn’t sold out but the cheapest tickets, the $200 ones where I was sitting, certainly were,

From the beginning Sunday Service choir’s multi-verse singers at the top of the stage  ruled the evening. There were soloists mentioned in the playbill but the only one I heard all night was one of the wise men performing a verse of “The Little Drummer Boy”. Otherwise, the choir handled the singing (I heard there were 100 members but it looked more like fifty to me) and the brass section (20 members) handled the music, and percussion was the third musical element, to the left, and that was all. .

So far, so good, but in his rush to present “Mary” Kanye failed to get the actors to signify at all. It was reminiscent of Radio City’s living tableaux ending to their “Christmas Spectacular”. A chorus of male dancers moved around the stage and whenever a transition occurred, stood stock still. As did the rest of the cast, when Mary meets with Elizabeth they circle each other before stopping completely while Kanye narrates.

Ah yes, Kanye’s narration, taken directly from the Bible for dummies text, is a cold, clear whatever. At his worst, he skipped Iines, stumbled, doubled back on himself. At his best, during Herod’s proclamation that every male (Kanye says every child, for some woke reason), under two years of age will be put to death, his anger is palpable, as is his passion. But it is all scarily unprofessional, and the entire direction by Vanessa Beecroft, is incomplete and much of the ensemble spend their time milling around and moving without fluidity or purpose.

But we are not there for anything but the music, and the music is sublime arrangements for choir of classic hymns such as “Gloria in excelsis Deo”. There was never a moment when the music was less then monumental. When Kanye turned to his own catalog, he pulled out the lyric and arranged the songs for many voices. “Can’t Say Nothing” “Devil In A blue Dress”, and  “Power” were among the highlights. . With “Power” he abbreviates the song to the bridge that leads to the “jumping out the window” as  Herod slaughters the infants of Bethlehem. Stripping away the song is huge for the way we hear it, and, as fans, the knowledge we have of the music lyrics, adds a dimension to Herod that shouldn’t be there at all.

In a recent interview with James Corden, West explained that in 2018 he lost $35M, in 2019 he received a tax rebate of $68M. “That’s God showing off,” he claimed. West has that sort of faith, new, and all encompassing, he can’t and won’t maneuver away from what belief in God has given him where his job is to work tirelessly for God the same way he worked tirelessly for Jay Z. That leads him to an opera like “Mary”,” it needs work but the music doesn’t need anything. Kanye is one of the greatest, and one of the strangest, pop superstars ever. He isn’t a dilettante, his sincerity is overwhelming.. He means everything. He means this.