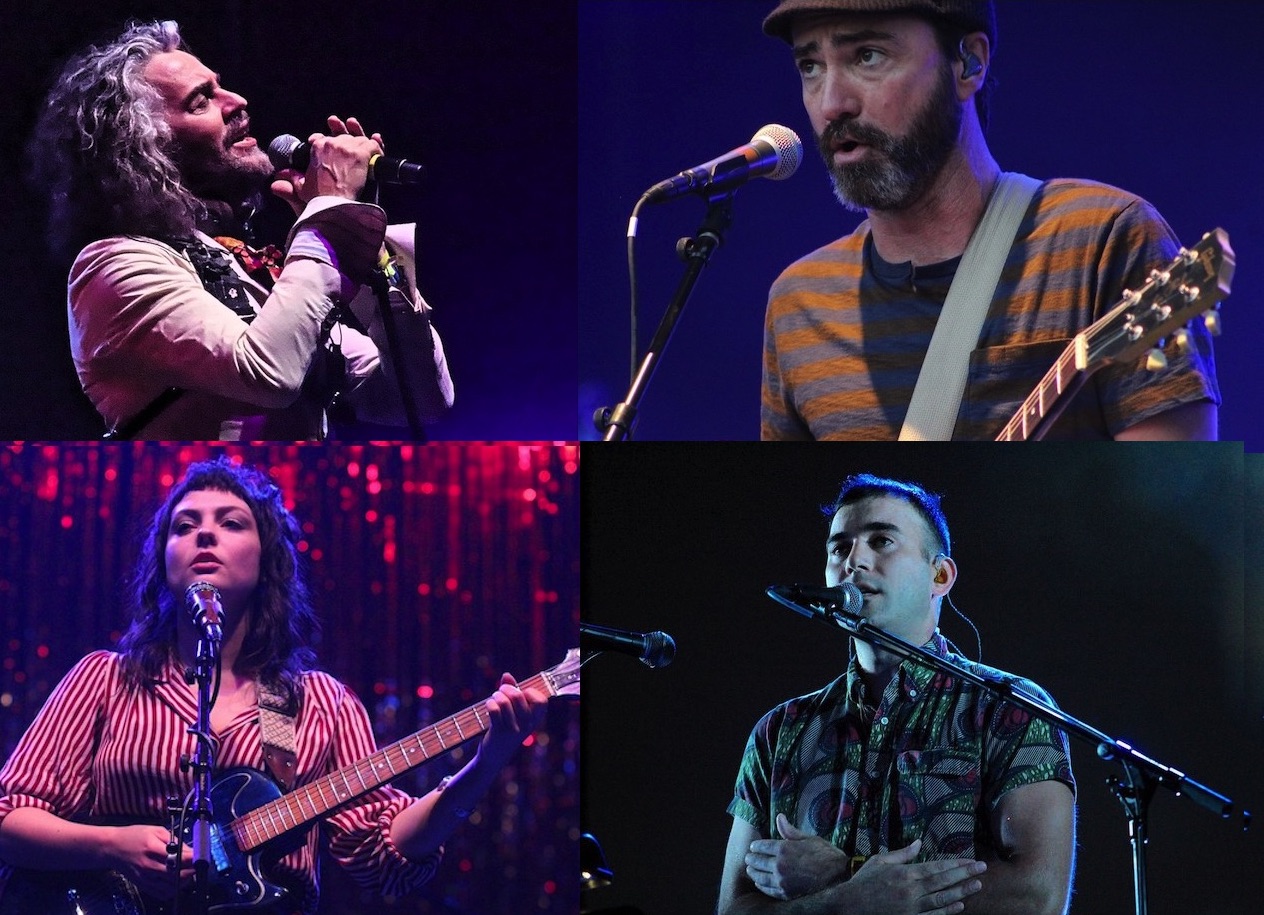 A lot of indie artists have released songs lately, and whether these are singles or tracks off upcoming or recently released albums, here are a few of these recent indie releases:

IDLES – ‘War’: We start with pure anger of propelling aggressive chaos, an war-anti-war sonic assault. The opening track of IDLES’ last album ‘Ultra Mono’ starts with ‘Wa-ching!/That’s the sound of the sword going in,’ and ends with ‘And we’re going straight to hell,’ a complete program for 2020. I guess this should be a song to experience live with bodies flying from the stage and pure mayhem, but since we cannot do that for a while, this will make people even angrier while listening to the dissonant and hurling track.

Pokey Lafarge – ‘Banks of the Ohio’: A murder country ballad with Pokey’s fabulous vocals over a simple acoustic guitar. Along with the other single ‘Washed in the Blood,’ a tune filled with Appalachian-inspired-harmonies, that he sings with actor Harry Melling, ‘Banks of the Ohio’ is used for the Netflix movie ‘The Devil All the Time,’ a dark story around the themes of evil, religion, and the abuse of power in rural small-town America. Both songs will transport you back in time, and are Cohen Brothers soundtrack material.

Kevin Morby – ‘Wander’: A determined tone with an almost Dylanesque dragging delivery over strumming to intense guitars and harmonica. The song is a loop with a hook ‘I wonder as I wander why was I born in the wild wonder,’ gaining momentum like a trip on a Midwest highway, before stopping abruptly. It was released with ‘Don’t Underestimate Midwest American Sun,’ a more delicately poignant, peaceful and spacey track, capturing the middle American landscape sonically. The two new tracks will be featured on Morby’s upcoming album ‘Sundowner’ set to be released on 16th October.

Surfer Blood –‘Rose Bowl’: A pop song filled with a sweet hook, an organ, a ravishing guitar loop, and bright vocals. It mixies old and new sounds, and if the fuzz starts rising toward the end, the sound stays bucolic and nostalgic. This is the last song off ‘Carefree Theatre,’ Surfer Blood’s fifth studio album released on September 25 (previously set to be released on May 1), inspired by the band’s amazing memories of the original theater, an iconic place from their hometown of West Palm Beach.

Yo La Tango – ‘Bleeding’: An immersive floating-in-ether song suspending time and space around Ira Kaplan’s ghostly vocals. I was expecting a bit more than this minimalist soundscape sprawling to nowhere, but Yo La Tango has something a bit different in mind for their forthcoming EP, ‘Sleepless Night,’ out October 9 via Matador. This is the only original track from the album, which will feature covers from The Byrds (‘Wasn’t Born To Follow’), The Delmore Brothers (‘Blues Stay Away’), Bob Dylan (‘It Takes a Lot to Laugh, It Takes a Train to Cry’), Ronnie Lane (‘Roll on Babe‘) and The Flying Machine (‘Smile a Little Smile for Me’). So ‘Bleeding’ could work like a dreamy transition between other songs.

Will Butler – ‘Surrender’: A handclap hippie song with a joyful anthemic chorus in an Arcade Fire meets Edward Sharpe and the Magnetic Zeros spirit. It’s difficult to resist to this devilish infectious piano tempo and these oh-oh-oh sing-alongs, that wrap the song with a sweaty gospel vibe. It’s a song off Will Butler’s brand new solo album ‘Generations,’ that he has described as ‘despairing, funny, a little bit epic,’ This song surely sounds epic.

Sufjan Stevens – ‘Video Game’: A dance beat over a celestial organ and Sufjan’s whispering tone. The track becomes a midtempo synth-pop song, a repetitive dancefloor alluding to Depeche Mode (your personal Jesus) with a Lana Del Rey song title, as the video game plays like a metaphor of your current society. If Stevens isn’t asking for anyone’s approval and rejects the current social media/career/reward system game, ‘I don’t wanna be a puppet in a theater/I don’t wanna play your video game’ the music falls into a festival-ready dancefloor here, with a very crowd-pleaser poppy sound. This is the second single from Sufjan Stevens’ last album ‘The Ascension,’ his first proper album since 2015’s ‘Carrie & Lowell.’

Death Valley Girls –‘Under the Spell of Joy’: A girlie chorus, a stomping beat, and a Stooges-like saxophone bring up the song to a joyful high-energy hymn, soon transforming into a fast psych-rock dark chaos, channeling ‘70s punk bands and the craziness of the current world. The song, that was inspired by a t-shirt that vocalist & guitarist Bonnie Bloomgarden was gifted from the heavy psych-rock band Joy, is the titled track from the band’s upcoming album, set for release on 2nd October via Suicide Squeeze.

Angel Olsen – ‘Mr. Lonely’: Angel Olsen’s sigh-like vocals over quiet strings soar in the most spectacular Roy Orbison effect during this Bobby Vinton’s 1962 classic. It’s pure vintage Olsen, a beautiful whisper and the soundtrack of Miranda July’s latest film ‘KAJILLIONAIRE,’ about a family of con-artists and a ‘desperate, hastily conceived heist’ involving a stranger. For this cover, Olsen has partnered with composer, pianist, singer and producer Emile Mosseri, but the instrumentation stays very subtle to let Olsen’s amazing vocals shine.

Fleet Foxes – ‘Sunblind:’ A track from their latest album, ‘Shore,’ which could sum up everything I know about Fleet Foxes: nostalgic melodies and harmonies blending into a serene soundscape of rays-of-sunshine-like voices and raindrops-like keys, flourishing into a rather upbeat tune. But I also picked the song because Robin Pecknold pays homage to a multitude of past musicians, Richard Swift, John Prine, Jude Sill, Elliott Smith, David Berman, Ian Curtis, Jeff Buckley, Nick Drake, Chris Bell, Otis Redding, Curtis Mayfield, Marvin Gaye… The new album is said to ‘celebrate life in the face of death,’ and the hymn-quality of the songs of Fleet Foxes fits this precise task very well.

The Shins – ‘The Great Divide’: An anxious and strange new track with James Mercer’s amplified soaring vocals, claps, and a chaos of synthesizer swirls. The new single was co-written and produced by Mercer, Jon Sortland, and Yuuki Matthews, and released via Mercer’s label Aural Apothecary and Monotone Records. ’Now an age has come out of the loneliness,’ Mercer sings, while lamenting about love in a broken world during 4 minute of electric parade and spacey synths. The song is described by Mercer as ‘a blend of futurism and nostalgia,’ and he said that they ‘used everything from vintage synthesizers to iPhones, from a Sixties Ludwig kit to an 808.’ One thing is sure, everyone is feeling the great divide right now.

The Flaming Lips – ‘Flowers of Neptune 6’: A typical Flaming Lips song with their signature sprawling lush arrangements, poignant hook and orchestral grandiosity. The psych-folk tone builds up in a stratospheric emotional height of colorful balloons before calming with guitars and voices. ‘Yellow sun is going down so slow/ Doing acid and watching the light bugs glow,’ could also be a typical Lips line from their blissful psychedelic universe starring at a summer sky filled with bugs, lights and stars as if they were back at composing ‘The Soft Bulletin.’ This is a song off their new album ‘American Head and Kacey Musgraves sings harmony on the track.