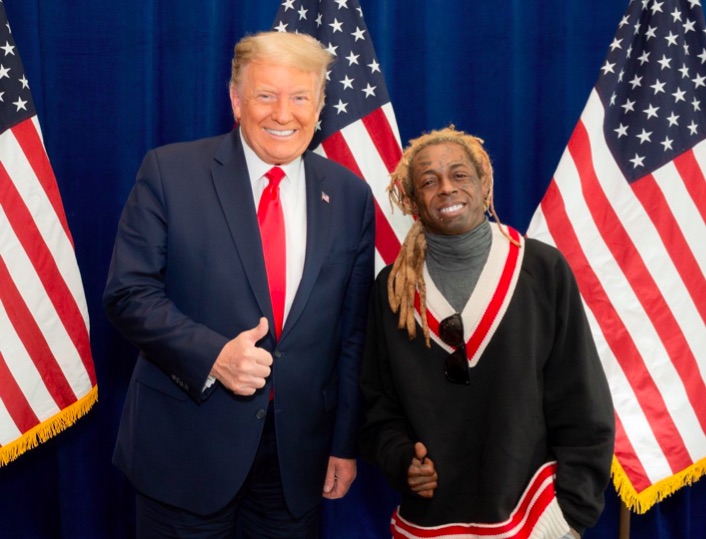 Lil Wayne is among the 274 Celebrities

The Washington Post has obtained an internal document from The Department of Health and Human Services regarding a $250 million contract to a communications firm, aiming to ‘defeat despair and inspire hope’ in the middle of the COVID-19 pandemic… Didn’t the Trump administration declare it was over a few days ago?

This campaign is shamefully a taxpayer-funded campaign used to boost Trump’s popularity, only a few weeks before the election, but there is another disturbing side: As for any commercial operation, they needed celebrities, and according to the Washington Post, a top Trump administration official inserted ‘partisan political interests’ into the contract, leading to the exclusion of many celebrities who had either criticized Trump, his administration and policies or supported former President Barack Obama, gay rights or same-sex marriage.

It went very far, 274 celebrities were under consideration, and only 10 were approved! Among these discarded celebrities were Jennifer Lopez (her Super Bowl performance with children in cages was a direct critic of the president’s immigration policies) Christina Aguilera (judged ‘an Obama-supporting Democrat and a gay rights supporting liberal’), Adam Levine (also a liberal Democrat who supported Obama and fights for gay rights), Justin Timberlake (because of his public endorsement of Obama and his support for gay marriage), Johnny Depp (‘aligned with the liberal left’), Jack Black (‘known to be a classic Hollywood liberal’)… Do they even realize that this profile can apply to 99% of the entertainment business? But the best description was reserved for young Billie Eilish, who is described as ‘not a Trump Supporter’ and by her statement at the DNC ‘Trump is destroying our country and everything we care about.’ They also tried to reach Cardi B, Britney Spears, Eminem, Beyoncé, Lady Gaga, Nicky Minaj, Travis Scott, Billy Joel, Eddie Vedder, Taylor Swift, Brad Pitt, the list goes on and on, and each personality is characterized by the population that could be reached, Black, Asian, elderly, with some ‘super-spreaders’ for the most popular ones. But really? Eddie Vedder and Sarah Silverman? Have they paid attention to their politics? What were they thinking?

According to Politico, the effort was reported ‘chaotic,’ and very controversial: ‘We could use that quarter of a billion dollars on buying PPE [personal protective equipment], not promoting PSAs with C-list celebrities,’ an anonymous HHS official declared to Politico. From the all-star list of the beginning, only Quaid, Winans, and Lemmer have reportedly recorded public service advertisements. However, they have reconsidered their involvement in the campaign. ‘It would be malpractice to my client,’ the representative for one celebrity said to Politico. ‘There are other ways to raise coronavirus awareness than partnering with the Trump administration.’ I could not agree more.

The Trump administration and the Department of Health and Human Services could have used James Woods, Kirstie Alley, they have both been clear that they were supporting the president, and everybody in Hollywood hates them for that. Strangely, there is a ‘Kristi Ally’ on the list, and she has declined, while James Woods has not answered. As for the music, after Lil Pump, Trump just got a new endorsement today by none other than rapper Lil Wayne. Although the rapper was flagged on the list as a ‘big supporter of Obama,’ I don’t see why he would not accept now. But I bet Lil Pump and Lil Wayne will not have a second thought at being used again for this campaign, if they receive some of these $250 M.