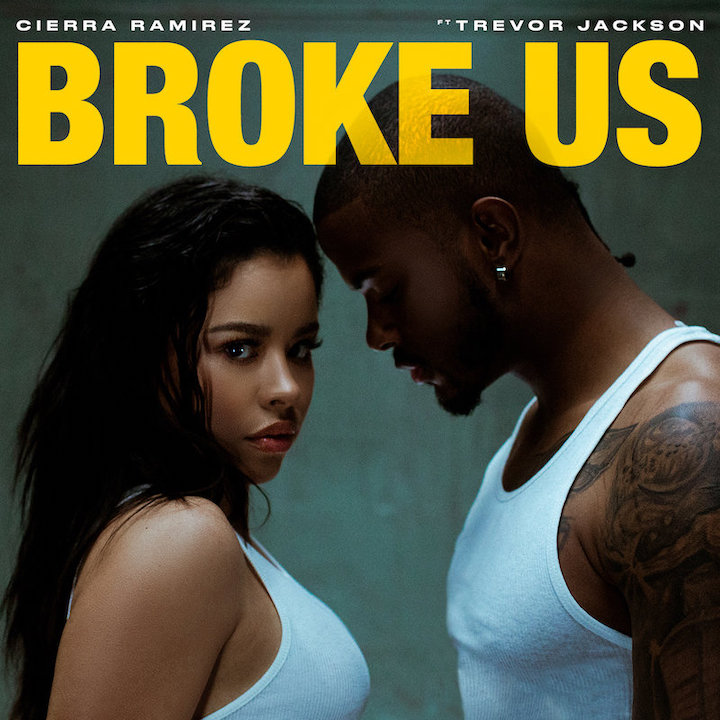 The song is about that relationship made of love, lust, and regret. A relationship that is seemingly pushed to the brink of falling apart, and the looming question of, “did we take it too far this time – is it over?” The two stars exhibit immediate chemistry and use it to best advantage in both the song and the simple yet steamy and powerful video.

The single, produced by Tha Aristocrats and recorded in LA is another step forward in Cierra’s trajectory in establishing herself as a serious force in music.

Cierra says of the song and video: “It’s been an amazing experience for both of my worlds to collide. Trevor & I, both being on Freeform TV shows and being signed to the same label, EMPIRE, seemed like the perfect fit for a collab and I couldn’t be happier. He’s so talented and he brings so much to “Broke Us.”

Trevor added, “Cierra asked me to be a part of the record while I was finishing up my album, Rough Drafts Pt. 2 and what I liked most about it was that it wasn’t your traditional pop break-up song. It has a certain amount of honesty and pain that I know will touch the listeners!”

This week Cierra was nominated for a Teen Choice Award for Best Actress in a Drama/Action Adventure and last month nominated by Univision, the No. 1 Spanish-Language Network, for a Premios Juventud (Youth Awards) in the On the Rise category. Cierra will be presenting an award at Premios Juventudwhich airs in over 90 countries and counts with the participation of today’s biggest and most relevant Latin performers taking place in Miami, FL Thursday July 18, 2019.

The multi-talented creative artist/actor, Cierra Ramirez, first came onto the scene in her role as Mariana on the hit Freeform TV show, ‘The Fosters’.  She has since continued on her musical path while recording her upcoming debut LP and releasing several singles and videos – all the while in the midst of starring-in and Executive Producing the spin-off of the Fosters – Freeform’s #1 rated show ‘Good Trouble’ – co-starring her friend and acting cohort, Maia Mitchell.

“Broke Us” finishes the song triad that began last winter with the release of her playful song, “Bad Boys” (over 5M Vevo views). The next single, “Liquid Courage”, released in March 2019, received acclaim from outlets such as Refinery29, Elite Daily, Billboard, and Just Jared among many others.  Other platforms such as People En Espanol, COMPLEX and Late Night with Seth Myers (NBC) have covered her music/acting trajectory.

In addition, the second season of Cierra’s hit TV show, Good Trouble premiered this week with the first episode airing on Tuesday, June 18 on the Freeform TV Network.