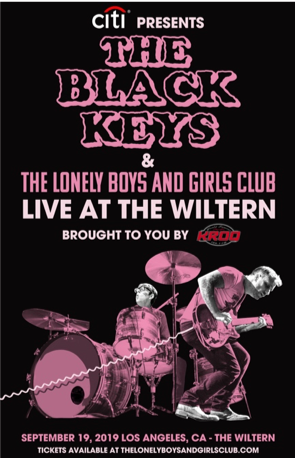 The Black Keys announce a Lonely Boys & Girls Fan Club show at Los Angeles’ The Wiltern on Thursday, September 19, 2019. Members of The Lonely Boys & Girls Club, The Black Keys’ official fan club, will have first access to purchase tickets when they go on sale here. Fans can sign up to the club for free here where they can also enter for chances to meet the band and receive music and videos before anyone else.

The Wiltern show, presented by Citi® and in partnership with KROQ, marks The Black Keys’ return to the stage after a five-year absence, kicking off their thirty-eight date North American “Let’s Rock” tour, with stops in major cities (full schedule below). Special guests Modest Mouse will provide support on “Let’s Rock” dates, and Shannon & The Clams, Jimmy “Duck” Holmes, *repeat repeat, and Jessy Wilson will each open select shows on the tour, too. The band also headlines 2019’s Life Is Beautiful festival in Las Vegas on Saturday, September 21. Tickets for all dates, including the Wiltern fan club show, are on sale here.

Additionally, The Lonely Boys And Girls Club is offering a chance to win a VIP backstage experience at each 2019 ‘Let’s Rock’ tour date, (tickets, meet and greets, & poster) and one lucky grand prize winner will win a full collection of posters from all the shows.

The band also shared live versions of songs, taped at a recent rehearsal in front of a small audience made up of members of the band’s fan club, including “Go” via Rolling Stone, “I Got Mine,” and “Lonely Boy”. For the performance, they were joined by their touring band, Andrew Gabbard and Delicate Steve on guitar, and Zachary Gabbard on bass.

The Black Keys’ ninth studio album, “Let’s Rock,” was released on June 28 via Easy Eye Sound/Nonesuch Records and debuted at number 1 on the US Top Current Album Chart. Internationally, “Let’s Rock” is the band’s third consecutive top 10 album in the UK, debuting at No. 3, as well as top 10 in Australia, Austria, Belgium, Canada, France, Germany, Ireland, Netherlands, New Zealand, Norway, Portugal, Spain and Switzerland, among others. “Let’s Rock” is available on all formats here.

“This is an album by the Black Keys called “Let’s Rock.” That’s what it does.”
-Pitchfork

“The Black Keys are rock royalty and to the relief of many, they aren’t quite ready to relinquish their reign.”
-Associated Press

“The Black Keys have mastered the form of guitar-based music, and the craft at work on these dozen songs is something to behold.”
-Wall Street Journal

“A fast, fun slice of blues-rock … A return to what The Black Keys do best. These songs are tightly focused, their pleasures immediate … Brilliant.”