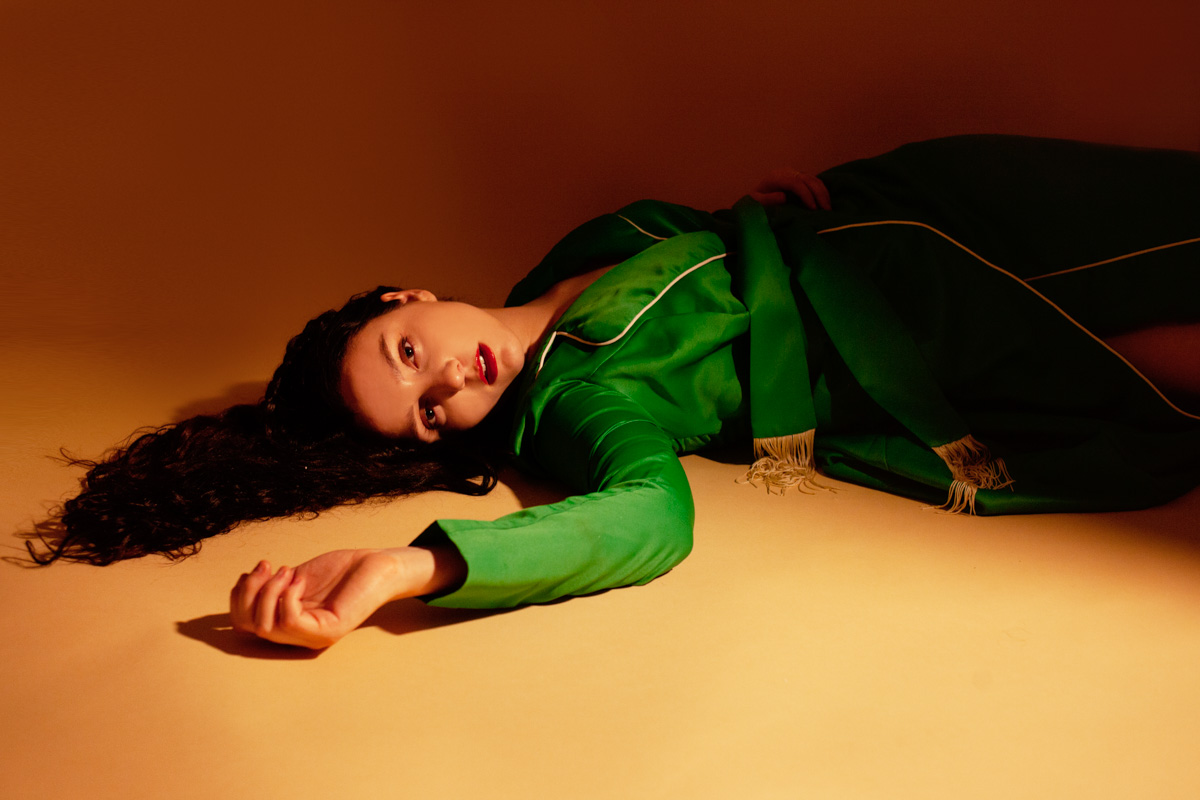 ANNOUNCES SINGLES COMPILATION DUE OUT LATER THIS YEAR

“Caroline Sans has been making arty, electronic pop as Sur Back for a few years now, and released the Kitsch EP

in 2016. Having since moved from Florida to NYC, Sur Back is back in business, with new single “Nostalgia in Motion” out this week.”

“Part of what makes Sur Back so unique is the way in which she incorporates these orchestral elements—the organic instrumentation added to her largely synth-driven songs creates a “pop music” all her own.”
– Office Magazine

“Complex layering and gorgeous harmony borrow from elements of classical and folk music and reflect Sur Back’s transition from rural idle to city living; the main theme of the record.”
– The Line Of Best Fit

“…pirouettes between layered combinations of guitars, vocals, and beats, along with various string and brass instruments, a la St. Vincent.”
– EARMILK

“You won’t be able to take your eyes off this self-taught producer, guitarist, and singer.”
– NYLON

“Heavy with an experimental ambient pop twitch, Sans corrals herself somewhere along the lines of Charlift’s Caroline Polachek and St. Vincent on the single, perfectly compressed for a sweltering summer.”
– The 405

“Her vocals slink and trickle in unexpected melodies, creating pirouettes in the vein of St. Vincent. Underneath, ambient productions augment her vocals, oft anchored by a drum loop like opener “Occam’s Razor” or deliriously drowsy synths and guitars…”
– Urban Outfitters Blog

Today, NYC-based experimental pop artist Sur Back shares her new single “Nostalgia in Motion.” Yesterday, Brooklyn Vegan premiered the track and its official music video, praising, “Musically, the single is all high drama, gothy in a romantic, Shelley sort of way, with pinging samples and orchestral synths, and Caroline’s ethereal voice driving things along. (She also cites OutKast’s “SpottieOttieDopaliscious” as inspiration.)” Sur Back will be performing at Alphaville on July 18th in celebration of the release. AdHoc will be presenting the single release show, which will feature a headlining set by Sur Back, and support from Den-Mate (solo), Rare DM and NOIA (purchase tickets here, RSVP to the show here). Later this year, she’ll be releasing a singles compilation, with “Nostalgia in Motion” being the first since her 2017 EP, Kitsch II. “Nostalgia in Motion” is out now on all DSPs.

This summer, Sur Back will release a number of singles, and collaborate with different art forms including artwork by Lissy Elle Laricchia. The singles will be the first step of releases working towards Sur Back’s debut album in 2020. All music was written, recorded, and produced by Sur Back, and “Nostalgia in Motion” features samples from artists Swim Good Now and Casey MQ. The track was mixed and mastered by Darren Seltmann (The Avalanches).TOUR DATES 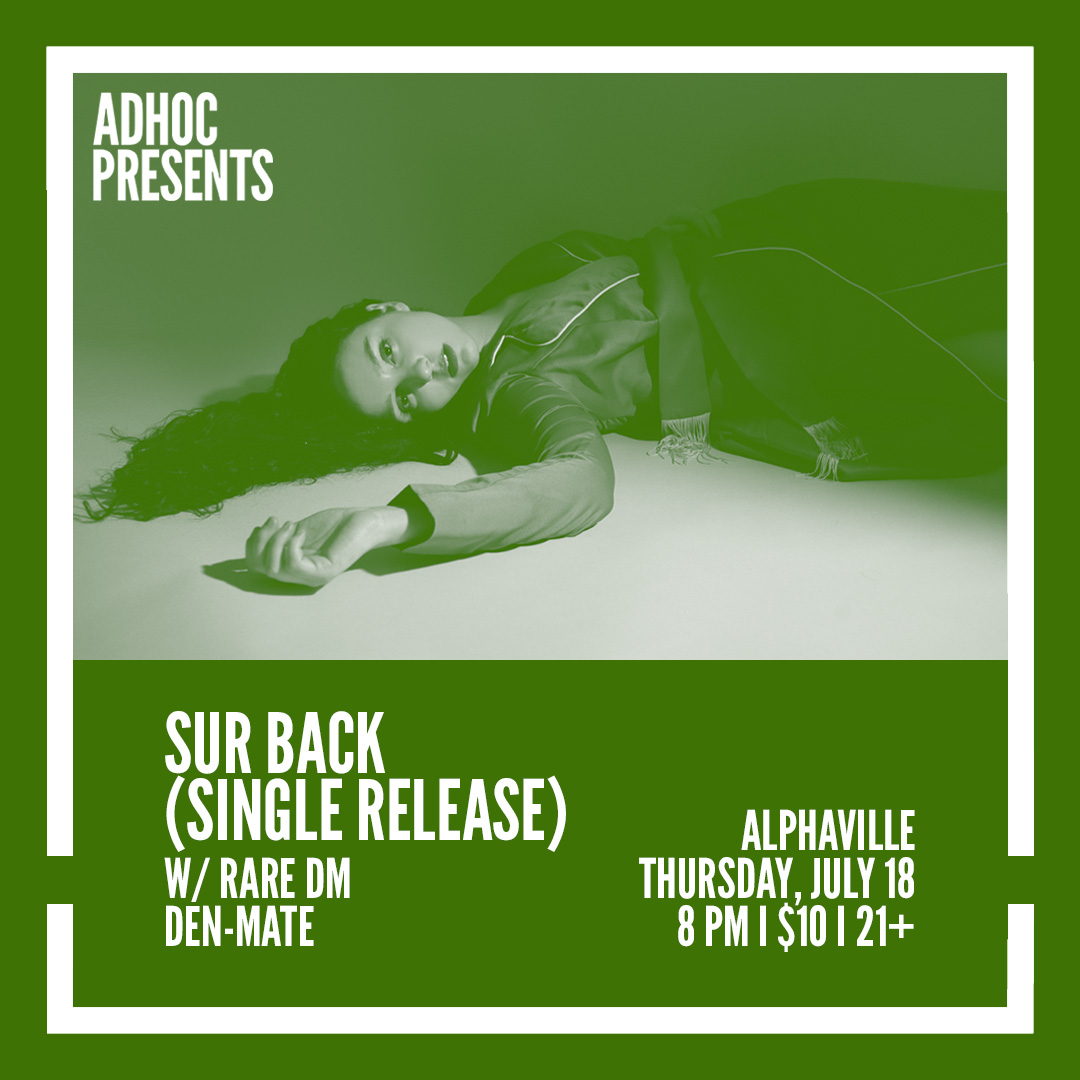 BIO
Sur Back is the experimental pop brainchild of former Florida ballerina, Caroline Sans. A producer at heart, Caroline marries layered combinations of guitars, vocals, and beats with string and brass instruments—producing a sound that’s equal parts whimsical and arresting. In live performance, she rounds out this synthesis with choreographed and improvised movements. Caroline draws the name of her moniker from a natural phenomenon described as “the green ray,” first observed by Arctic explorer Sir George Back. The green ray is also said to be a philosophical phenomenon—a moment of epiphany where your thoughts, and the thoughts of those around you are perfectly understood—a struggle that plays a clear role throughout Caroline’s tracks. “Sir” was changed to “Sur” to imply the Turkish translation of “sur”—”steer”— in hopes the music will “steer back” its listeners to epiphanies of their own.

In 2016 Sur Back released her first EP Kitsch, which included the single “Trophy Daughter.” The EP was followed by singles “Valentino” and “Anyone Else” and later EP Kitsch II.