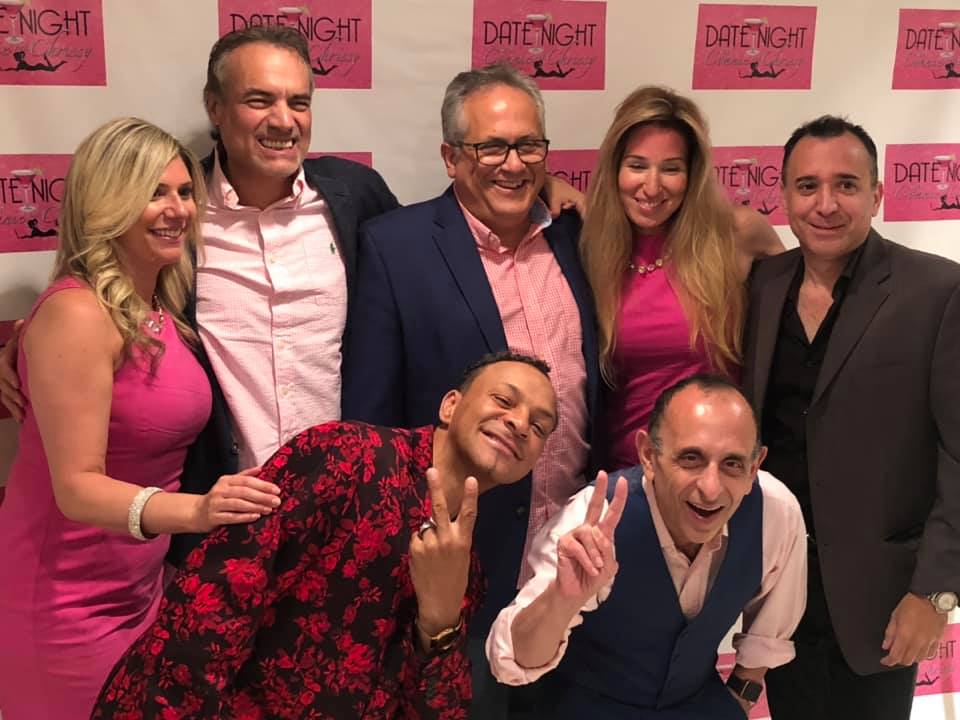 Filmed live from their babe cave in Long Island, “Date Night With Connie and Chrissy” is a weekly pretty in pink, good humored hour, of talk and laughter. The duo met four years ago and the chemistry was instantaneous, a double act both distinct (Chrissy might have been a nerd, Connie untouchable) and similar with Connie a lifestyle teacher for teens and Chrissy in real estate, they harness a whirligig of energy, smartypantsness and good vibes. You can watch them on Facebook live  or on Channel 20, Cablevision, every Friday at 8pm, here.

I know this because SohoJohnny Pasquale, my partner in rocknyc.live, was invited to be a guest on Friday, July 5th’s episode, and he had myself and his childhood friend, Frank Gadero (whose real job is representing Takis Rolled Corn Tortilla Chips, which change the color of your tongue when you eat them, much to the delight of teenagers everywhere) to join him. SohoJohnny was at Date Night to get out the word about what promises to be the event of the season, the all day and all of the night Classic Summer Disco Party at the Italian Center Of Stamford Connecticut, with part of the proceeds going to to the American Cancer Society. I was at last year’s  party, and let me tell you, if you are a fan of disco, or food, dancing, or just being with 100s of terrific people, this is where you need to be. It is the only truly all day event, it starts at noon and goes past midnight with a Barbecue and a sit down dinner all for $49.95 (here) and true stars of disco: Heatwave, Harold Melvin and the Bluenotes and on and on…

As the days leading to August 10th fly past, simply watching SohoJohnny multitasking is exhausting. At a diner, killing time before the show, he is fielding calls and gets one from Star Hanson -who you probably know through “Hungry For Your Love” as Hanson-Davis, and as a king of freestyle, and with three movies to his name. SJ invites Star to join us and it is the icing on the cake. First SohoJohnny talked about his family’s three generations in Soho, then he pivoted to the Classic Summer Disco Party and the endless list of featured artists, starting with the legendary Tavares -who I saw opening for Niles Rodgers’ Chic at Hammerstein Ballroom  in 2012 (here) and wrote: “Tavares are a very tight unit, the four brothers come across as a take on doo-wop and they cream everything they come within a mile. Amazingly, Tavares can still move pretty well. Though all of them are older than Mick Jagger, they show off dance moves…” Tickets are available here.  And they are just the tip of the iceberg… PS Connie and Chrissy will be greeting guests on the “pink” carpet! 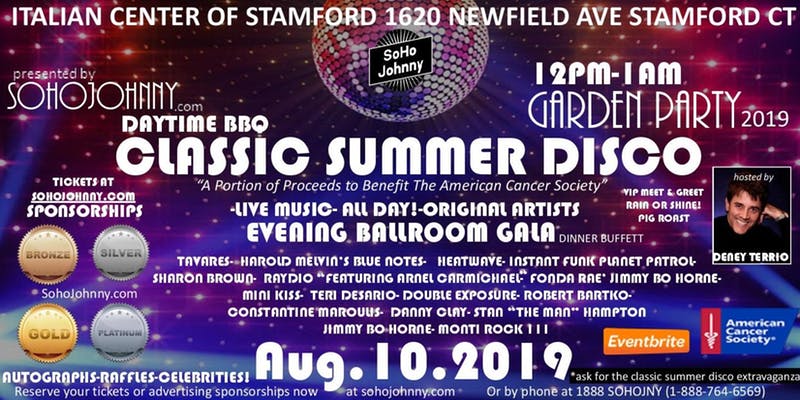 I’m up next, I tell a few stories of interviewing rock stars in the 1980s, and a few stories of the myriad of fights we get into at rocknyc.live, and almost get #metoo when I note how cute the women are! I am not crazy about seeing myself on film, I look like a hunchback and can’t stop touching my neck and hair… Luckily, Frank looks fabulous as he  brought up the rear with amusing stories about re-entering the dating pool in the world of Tinder, though re-entering is the wrong word, Frank married his High School sweetheart who he met when he was sixteen… so this is a brave new world for him. Frank and I left the couch and  Star Hanson ended the evening, a freewheeling charmer, with a fistful of jokes he can use to cut right across to your funny bones, words to say about  Hurby “Luv Bug” Azor, and the first Spinderella, and more.

Visiting with “Date Night” was a blast and so is watching it, it is all Long Island special sauce, a total vibing fun and games with humor and also a certain vision of life that is its own reward, a spoonful of sugar to make you smile and think. The duo improve each other, the snark funny and the sweetness mix and match, they are already experts at not stepping on punchlines and putting everyone at ease and at home while keeping in mind we are all there to entertain you. Chrissy worked for MTV and Connie has been in media all her career, and they have the simple self-assuredness of beautiful, professional women, and are both funny and charming at the same time. If you can’t wait till August 10th to get a viewing, they are doing their first show in front of a large (300 people) audience on Saturday July 20th, don’t miss it, get tickets here. 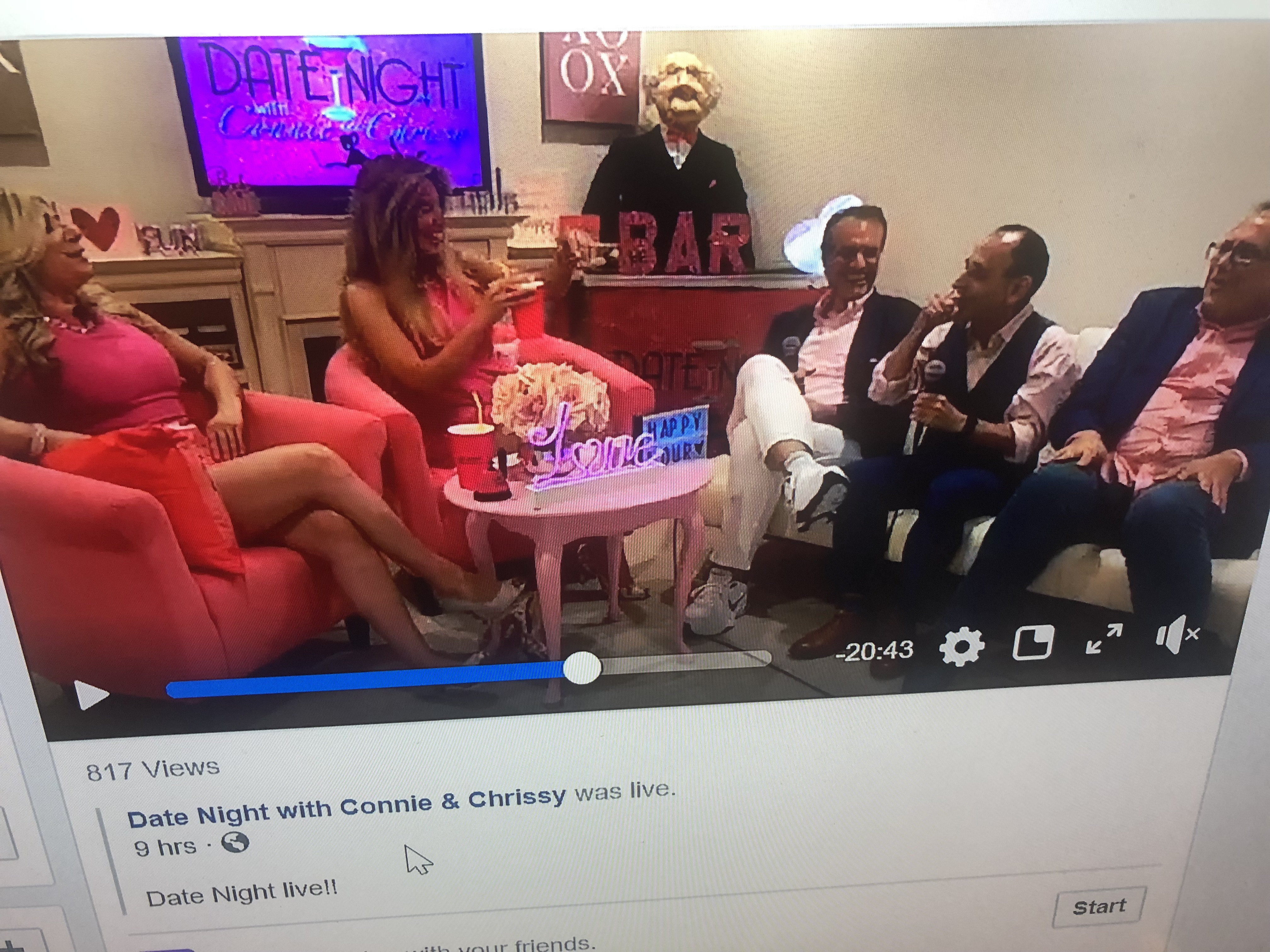 Quick shout out and thanks to the cooler than I’ll ever be Steven Calapai, a top promoter and party planner and the man who put it all together for us, and Gayle Serle, the center of stability in the whirlwind surrounding SohoJohnny and the Classic Summer DIsco Party 2019!

Meanwhile, here is a link to our episode.