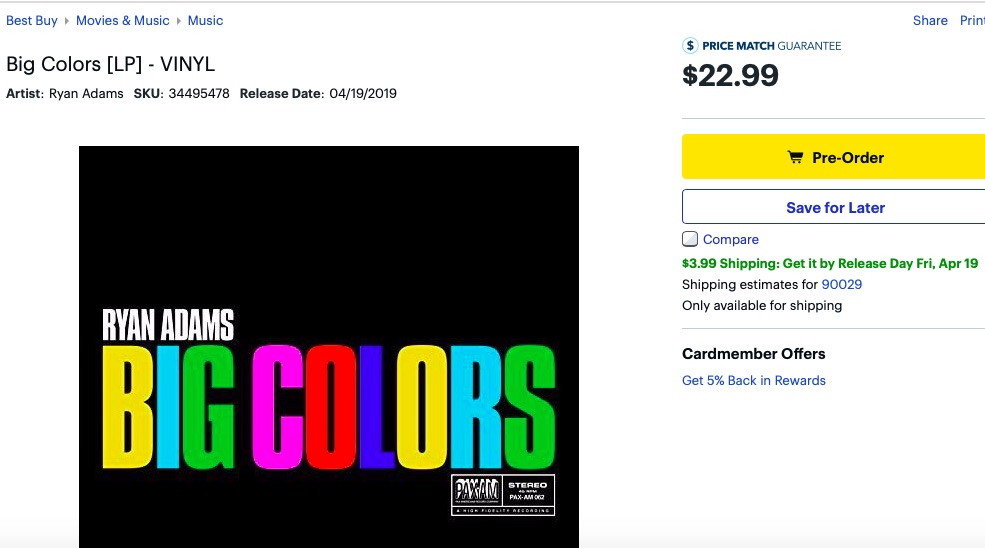 Ryan Adams fans (the ones who survived last month’s wreckage) are probably very eager to put their hands on his doomed material, like his LP ‘Big Colors’ whose release was canceled after the series of sexual abuse allegations that landed on the singer-songwriter last month.

The album, which was supposed to be the first of 3 albums in 2019, had been set for a release on April 19th via his own label Pax-Am, but was put on hold mid-February, and there was no trace of ‘Big Colors’ anywhere.

Surprisingly, the album is back on two websites, Best Buy and Amazon! The two big retailers are currently offering a pre-order of a vinyl version of ‘Big Colors’ with the original release date, April 19th. Could it be a mistake? Amazon had completely removed any order of the album, but it is suddenly back, while they have not even uploaded a photo of the cover!

Could it mean we will finally hear these songs? People who had ordered the album got their order canceled last month, but they apparently can order it again, and some fans have already started to do it, and have posted their confirmation order on social media.

However, ‘Big Colors’ is still not available on Pax Am page… and I don’t know what to think, but how often does Amazon make a mistake? No words on a CD release yet.

One Response to “Film At Eleven: Is Ryan Adams’ ‘Big Colors Finally Coming Out?”