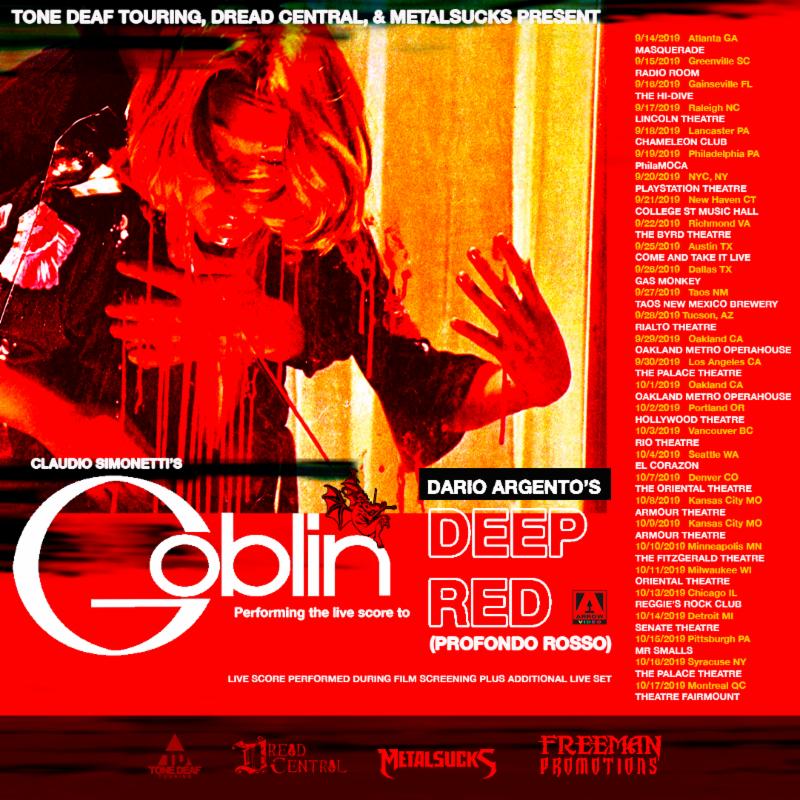 Italian musician, film score composer and keyboardist Claudio Simonetti, will return to North America with his band on tour this fall. The tour begins September 14th in Atlanta, GA and runs through October 17th in Montreal, QC. A complete list of dates can be found below.

The highly-anticipated tour will feature two sets, the first featuring a screening of Dario Argento’s classic giallo “Deep Red/Profondo Rosso” where they will be performing the score live. The second set of the show will showcase classic Goblin material as well as some selections from their latest releases.

Simonetti comments on the tour, “After the great success of our 2018 US tour it is a great pleasure for me to announce our next tour in the United States and Canada with my band Claudio Simonetti’s Goblin, where we will present the Dario Argento’s film “Deep Red/Profondo Rosso” for the first time in US, with the soundtrack played live during the screening of the film.

At the conclusion of the film we will also play the classics Argento and George Romero soundtracks and many more, including some excerpts from our new album which will be released at the beginning of September.”

Simonetti has specialized in the scores for Italian and American horror films since the 1970s.

A long-time collaborator of director Dario Argento, Simonetti has worked on several of the director/producer’s films including Deep Red, Suspiria, Dawn of the Dead, Tenebrae, Phenomena, Demoni, and Opera. His work has long been an iconic staple of Italian genre cinema, collaborating with directors like Ruggero Deodato, Umberto Lenzi, Lucio Fulci, Enzo G. Castellari, Lamberto Bava, and Sergio Martino. His highly experimental scores are known for their signature, electronic and progressive rock-influenced sound, and have been imitated numerous times. He studied at the Conservatorio di Santa Cecilia in Rome.