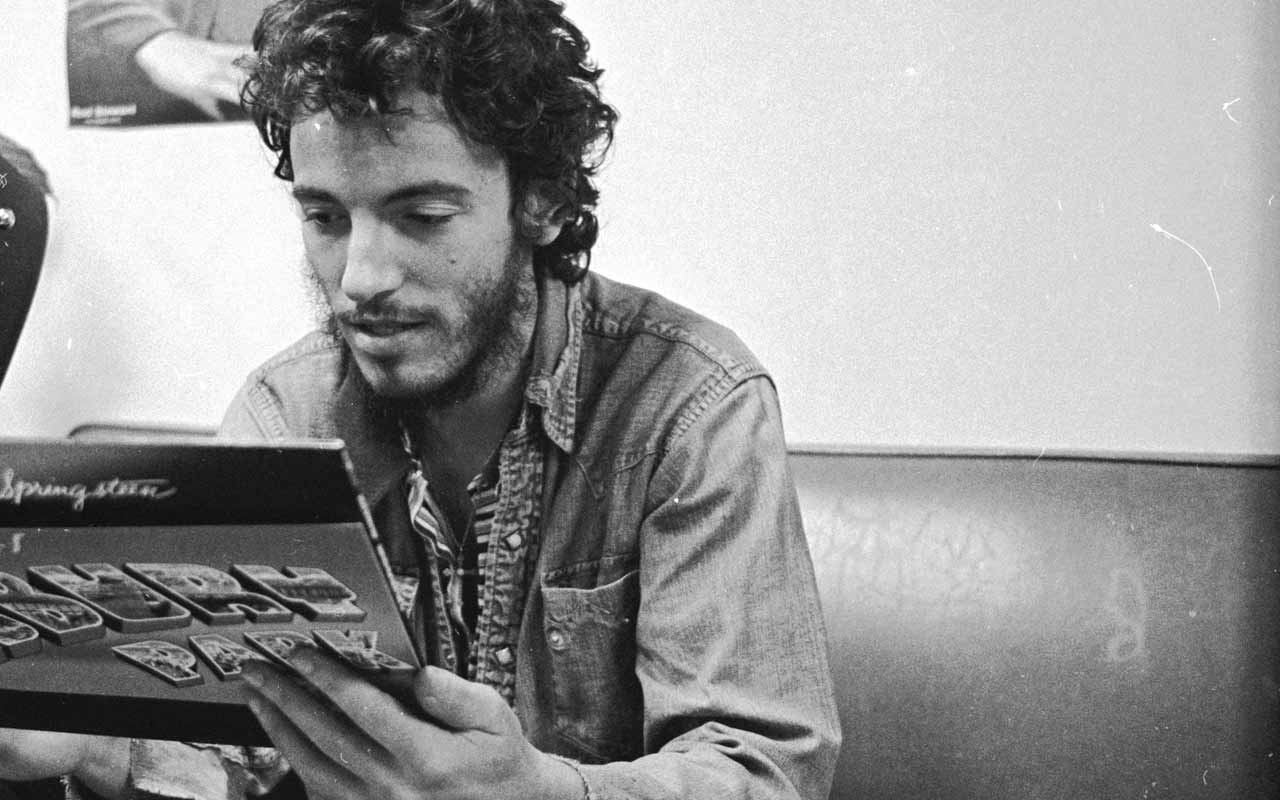 Greetings From Asbury Park (1973) – Bruce Springsteen – At the time, this seemed like another turgid Bob Dylan wannabe folkie waiting to go electric. Today… it stands up very well, what doesn’t doesn’t, but what does? “Blinded By The Light,” “Growin’ Up,” “For You,” the jazzy “Spirit In The Night” and “It’s Hard To Be A Saint In The City” are all rock poetic triumphs, and “Growin’ Up” was central to his “Bruce On Broadway” year long residency – A-

The Wild , The Innocent And The E Street Shuffle (1973) – Bruce Springsteen – Has there ever been a leap as huge as Bruce’s between his debut and his sophomore effort? Ariel Swartley wrote one of the greatest pieces of rock criticism I’ve ever read about it (here) which she dubbed two value judgements and a dance step and claimed Springsteen  “triggers memories like you were a jukebox and he was the man with all the quarters,” before concluding “The songs final scene has the hypernaturalism of a closing shot in a grade B western: ‘He slips on his jeans and they move on out to the scene – all the kids are there’ – That string of adverbs is as deliberate as a walk into the sunset. It’s a hero exit except the boy-prophet is on his way to the hop” – A+

Born To Run (1974) – Bruce Springsteen – A prequel of sorts to Wild Innocent, Mary is still getting into his car and Rosalita is a figment of his imagination, the road is like the road in “American Graffiti” as Bruce searches for the exit but is always going round and round and round: it is a rock and roll nightmare and salvation has never been harder to find or more rewarding once found. The E Street Band are front and center – A+

Darkness On The Edge Of Town (1978) – Bruce Springsteen – Informed by the dead-end of English punks who will never get a job in their lives, and US metalheads, manual laborers till they die of exhaustion, Bruce observes and details – A+

The River (1980) – Bruce Springsteen – A double, because Steve and Jon were arguing about rock and art, and Bruce was refereeing, so they stuck em all on. Also,that’s  the reason it gets dark and depressing on side four. Somewhere here, a boy who was a man becomes an adult, and the party songs just reinforce it – A

Nebraska (1982) – Bruce Springsteen – The E Street band are MIA for the first time since the first album, these demos from the new great depression are stark and beautiful, Bruce would try this trick on other albums and never manage it – A

Born In The U.S.A. (1984) – Bruce Springsteen – In which Bruce discovers 808s and synth pop and transforms the charts into his own image – A+

Live 1975 – 1985 – Bruce Springsteen And The E Street Band – Bruce finally gives his band headline billing, and the forty song, five album, knocking on four hour extravaganza, doesn’t merely answer, it also over replies to those who believe Bruce was only Bruce on stage… the only indispensable version is his cover of Tom Waits “Jersey Girl” – B+

Chimes Of Freedom (1988) – Bruce Springsteen – Pulled off his Amnesty International tour, with Bruce sounding very concerned as he explains the tour was to celebrate the 40th anniversary of the declaration of human rights… “Be True” is a live take on the flip side of “Sherry Darling” and “himes Of Freedom” is that one – B

Human Touch (1992) – Bruce Springsteen – So he broke up the band, took a four year break, and returned with this dark and brooding modern rock sounding album, and the world blinked – B

Greatest Hits (1995) – Bruce Springsteen – With sales not what they were, these were the real hits plus three new songs featuring the return of the E Street Band – B

The Ghost Of Tom Joad (1995) – Bruce Springsteen – Importance is not a synonym for lugubrious though don’t tell Bruce that on this acoustic folk album, that took its lead from a fictional character, already revered BY Woody Guthrie, as it told fictions about the fictional working class. The title track is a good song but a poorly considered song, “Straight Time” is a good song period, and then it gets even slower and more boring, as though those in search of a living wage don’t deserve a good time – C

Blood Brothers EP (1996) – Bruce Springsteen – It went along with a documentary about the E Street Band and Bruce together again recording the three songs on the Greatest Hits compilation, five songs, all crap… around about right this second I lost interest in Bruce on record – C

Tracks (1988) – Bruce Springsteen – A compilation off 66 demos, outtakes, and lost in the shuffle songs. Show me an album with songs as great as “Bishop Danced,” or “Johnny Bye Bye” and I’ll show you Another Self Portrait – A

18 Tracks (1999) – Bruce Springsteen – 15 off tracks, three others including “The Promise” -the hardcore fans insisted on the Darkness On The Edge Of Town outtake, after Bruce played it live in 1976 – B

The Rising (2002) – Bruce Springsteen – His 9-11 album, and so far my opinions have been essentially the same as most people’s but I dislike this album, it doesn’t work as metaphor and works less as documentary. It’s a little similar to the problem Bruce had with “Tom Joad” -it has the ring of received opinions the way, though undoubtedly just as received, the working class boys to men of Darkness didn’t. I’ll give him the title track and “My City Of Ruins” but nothing else, especially the forced ambivalence of “Waitin’ On A Summer Day”. Brendan O’Brien was not the man for the job… Incidentally, I caught the tour at Shea Stadium and it is one of only three times I’ve not enjoyed Bruce on stage… Grade: C

Devils & Dust (2005) – Bruce Springsteen – Nebraska was a fluke and the invigorating “All The Way Home” doesn’t save the album, which is still better than the middle one – C+

We Shall Overcome: The Seeger Sessions (2006) – Bruce Springsteen – Pete Seeger deserved this sort of tribute and Bruce does Pete very, very well – B+

Bruce Springsteen with The Sessions Band: Live in Dublin (2007) – The live version plus greatest hits – B

Magic – Bruce Springsteen (2007) – No, “Girls In Their Summer Clothes” isn’t all that, though “Livin’ In The Future” is Bruce’s best piece of agitprop ever… that “is anybody alive out there” is deadly – C+

Greatest Hits (2009) – Bruce Springsteen & The E Street Band – Why? To add two tracks off The Rising and one off Magic – C

Working on a Dream (2009) – Bruce Springsteen – A lousy album of boring songs including “Outlaw Pete” which, well listen to it – C-

The Promise (2010) – Bruce Springsteen – Since Darkness On The Edge Of Town isn’t simply my favorite Bruce album, but if you have it in your top ten albums of all time, I’ll not disagree, I was gagging for this, but it is really a case where Bruce made the right choices the first time around – B-

Wrecking Ball (2012) – Bruce Springsteen – “Wrecking Ball” is the worst song Bruce has ever written, but “Shackled And Drawn” is excellent and “Easy Money” isn’t bad, and while Bruce sucks at politics (he lost his way years ago, tramping for the dire John Kerry), the rest of it sucks – C+

High Hopes (2014) – Bruce Springsteen – Odds and sods and some of em are great, his cover of Suicide’s “Dream Baby Dream” is Springsteen’s best recording of the decade – B

Tower Theater, Philadelphia 1975 (2015) – Bruce Springsteen & The E Street Band – Bruce began releasing his live shows on his own website (for money) one album earlier… I haven’t heard all of them, I have heard this killer New Year’s Eve set at the legendary theatre and a coupla other’s as well, including his second longest show EVER – A

The Ties That Bind: The River Collection (2015) – Bruce Springsteen – Overlong so how is it better even longer? Go figure… the set I saw at MSG was genius – A

Springsteen on Broadway (2018) – Bruce Springsteen – I had front row for this and was still bored (though a shout out to Bruce’s killer boots), it is worse on record, except for that song where he tells his Mommy that if she wants a sad song he ain’t gonna play it – C+